View Profile
We have seen Navjot Singh Sidhu as a cricketer and then as the judge of Laughter Challenge on Star One. Now the news is that he has been approached to host Zee's upcoming reality show- SaReGaMaPa Mega Challenge. 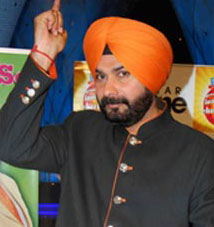 Featured Video
According to our source, "After testing the waters of judging, Sidhu is very keen on treading the waters of hosting with Zee's Saregamapa Mega Challenge. However, he has not signed on the dotted lines yet".

Telly Buzz had given its readers exclusive information on the 24 contestants to take part in the Mega Challenge. The report stated that three participants would represent each state and the show in itself would represent eight states.

We further had reported that there will be different judges for every episode. Since the anchor was the only constant factor, the curiosity about the anchor of the show had already started brewing.

When contacted, Sidhu confirmed the news and said, "Yes, I have been approached to host Mega Challenge on Zee TV, and am looking forward to it. But I have not signed the agreement, as I have not got a revert from the channel. So I really do not know what the position is".

The shoot for SaReGaMaPa Mega Challenge starts on 27th October, and the show launches on Zee TV on the 30th of October.

Well, if all goes well, we can see Sidhu in a new avatar!!

12 years ago not looking forward for him as an anchor of musical programme .. he is too loud and will talk more than give chance to singers !!!!!

+ 8
12 years ago umm i don't know how well he can do it.
srgmp as a show is going to change entirely with him there

12 years ago Cool, Sidhu will rock it

12 years ago No NO no no siddhu please. he is better in laughter show only. bring aditya narayan or any other young person to host the show..