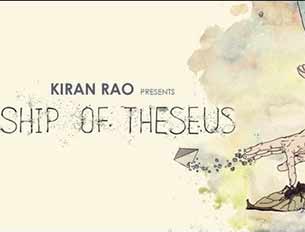 Anand Gandhi's "Ship Of Theseus" has been adjudged as the best feature film for the 61st National Film Awards, while Hansal Mehta has been named for best direction for the movie "Shahid". The winners were announced here Wednesday.

"Ship Of Theseus" is t he story about an unusual photographer, an erudite Jain monk and a young stock broker told through different segments which finally unite them through a strange circumstance.

According to the jury, the film "depicts issues of intuitive brilliance, metaphysical belief and intricate morality in a world full of contradictions".

"Shahid", starring Rajkummar Rao as the real life slain human rights activist and lawyer Shahid Azmi in the backdrop of communal violence unleashed in Mumbai, tells the story of an impoverished Muslim struggling to come to terms with injustice, inequality and rise above his circumstances.

"It is an inspiring testament to the human spirit," according to the jury members.

Hansal Mehta's direction in the "remarkably handled" film "Shahid" has been lauded.