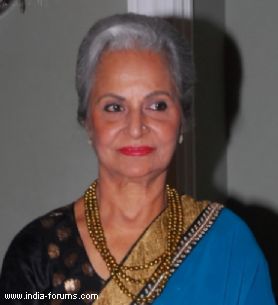 Author Nasreen Munni Kabir has penned "Conversations with Waheeda Rehman", which provides a rare view of the National Award-winning veteran actress's life. It is set to hit the stands soon.

Published by Penguin, the book on the veteran actress will hit the stands by end of this week, said a statement.

Waheeda, whose career spans about six decades, is renowned for her natural talent in front of the camera and her ethereal beauty.

The 77-year-old, who started her Hindi movie journey with a bit yet impressive role in Dev Anand and Shakila-starrer "C.I.D", went on to become one of the most sought after actresses of her time and churned out several hits - "Pyaasa", "Solwah Saal", "Kagaz Ke Phool", "Kala Bazar", "Bees Saal Baad", "Chaudhvin Ka Chand", "Reshma Aur Shera" and, not to forget, "Guide".

In the recent times, she featured in films such as "Rang De Basanti" and "Delhi-6".

In the book, she speaks about her life and work - from the devastating loss of her parents when she was young to making a life in cinema on her own terms, from insightful accounts of working with stars like Guru Dutt, Raj Kapoor and Dev Anand to her friendship with actresses like Nargis and Nanda.

Nasreen is known for writing books like "Guru Dutt: A Life in Cinema", "Talking Films and Talking Songs with Javed Akhtar", "A.R. Rahman: The Spirit of Music" and "Lata Mangeshkar: In Her Own Voice".