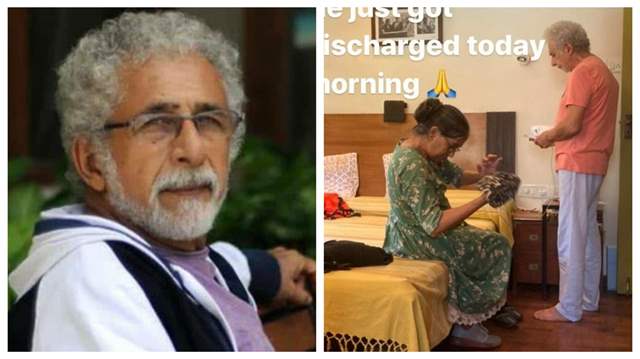 It has been nothing but dreadful for the entertainment industry when we consider the past one year or so where we have lost some absolute legends in the form of Irrfan Khan, Rishi Kapoor and today saw another shocker as the legend that is actor Dilip Kumar passed away after prolonged illness.

Amidst all that, there was a mini scare a while ago when it was reported that actor and legend Naseeruddin Shah has also been admitted to the hospital. But there is good news coming in that Shah is much better now and has in fact been discharged from the hospital. Shah was being treated for pneumonia in Mumbai's Hinduja Hospital but has now been discharged. His son and actor Vivaan Shah shared pictures of the 70-year-old and his wife, actress Ratna Pathak Shah, from their home and captioned them: "Back Home" and "He just got discharged today morning."

Shah was admitted to Mumbai's Hinduja Hospital last week after a "small patch" of pneumonia was detected in his lungs but more on that later.

Shah was admitted to the hospital on Tuesday last week. The next day, Ratna Pathak Shahhad shared an update about his health and told PTI: "Yes (he has a) small patch and all under control. (He is) Responding well to treatment so hope he'll be discharged soon."