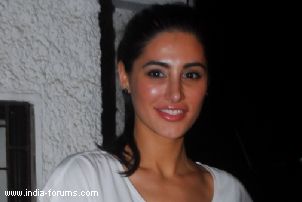 Bollywood actress Nargis Fakhri, who recently shot for her first international film titled "Spy" in the US, caught up with global rapper Curtis Jackson, popular as 50 Cent.

Nargis was clicked with the "Candy Shop" hitmaker during the shoot of "Spy".

The film will see the "Rockstar" star in her first action role.