The various promos of COLORS and Playtime Creations' new show, Laagi Tujhse Lagan portray the protagonist Nakusha to be a very ugly girl living in the slum areas of Mumbai. 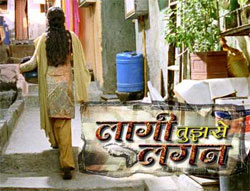 Featured Video
However, here lies the main concept of the story wherein there is a beautiful face hidden behind this distorted face, as shown in the promos.

Laagi Tujhse Lagan is the story of the extremely beautiful Nakusha who lives in the slum areas of Mumbai with her family, comprising of her mother, father and siblings.

According to our source, "This is the ploy of Nakusha's mother, played by Chinmayi Sumeet to keep under wraps the real beauty of her daughter. She gives her daughter a masked identity, by making her look ugly and unpresentable. She does this in order to shield her daughter from the evil eyes of the society, but heart of hearts longs for a good future for her daughter. In other words, the mother is ready to accept the ill-treatment that the society bestows on her daughter because she is ugly looking, but is just not agreeable to reveal her real beauty to all, as she fears a worse consequence".

The show will open by showing Nakusha to be ugly looking, but as the story unfolds viewers will get to know that the girl is really beautiful. Laagi Tujhse Lagan will trace the story of Nakusha, whose life will take her thro' many ups and downs, which will eventually lead her to fall in love.

We tried calling Producer Hemal Thakkar, but he remained unavailable. We could not get thro' to Mahi Vij too.

Mahi Vij who was last seen in Sahara One's Shubh Kadam will be seen essaying the role of Nakusha. The show launches on 28th December, from Monday to Friday at the 9.30 PM slot…

+ 5
12 years ago mahi's earlier show was kaisi ye laagi lagan and this one is named laagi tujhse lagan!

dee_swam 12 years ago Looks like another unwatchable, about a forever-suffering girl. Can't soaps be more positive?

+ 5
12 years ago @Beena Di,
I Completly agree, Hopefully Playtime does something good this time, Concept is very good to me but hopefully they live up to our expectation!

+ 3
12 years ago imran i completely agree with you.......though many times concept is very strong but it all depends on how it has been portrayed..........and it depends on creative writers and production house bcause i have seen many production houses who does not believe in quality......sad but true

+ 5
12 years ago @-Saalekh- Hmm,i agree, the concept is quite strong, I hope they present it well but the Production house is Playtime, there Jeevan Saathi was a torture and Hum Dono which had GR8 concept cudnt do well, concept wise the show is good but it depends on the direction,acting and other things ..

@Eloquent - A face be smeared with Shoe polish!

+ 3
12 years ago @Imran94<br/>lol i saw tht bengali movie too :P<br/>old concept but even the worst n oldest concepts can be wonderful if they r presented really well...i dnt expect much but wish this show wud give more depth to how society luks at an ugly girl n shanges their perception as soon they see her being pretty...it wud be pretty interesting to see if the society only cares bout outer appearance n nothing more to tht...& this girl can do tht since she's suppose to be ugly n pretty both lol