Touch Baliye! No no..its yet Nach Baliye, but with a 'touch' of creativity! With a tagline that reads 'Yeh Nach Nahin Aasan', this year, the makers of Nach Baliye are going all out to ensure the competition is tough for the jodi's & choreographers.. With a dash of adventure & excitement, the jodi's are stretching themselves to the limit to make & prove a point. For the theme, 'Touch Baliye' - the jodi's had to ensure, they don't lose contact of one another, at any point throughout their performance. Well, though it sounds easy..it definitely was not! 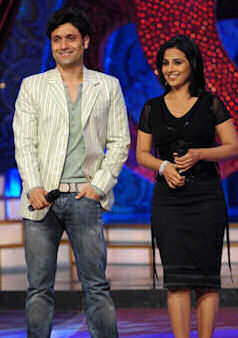 Featured Video
To add to all the fun & excitement, the ' Bhool Bhulaiyaa' stars, Shiney Ahuja & Vidya Balan were invited to the show as special judges. So, how did the jodi's perform? Were they able to 'touch' the judges' & audiences' hearts with their performances? Lets find out..

Kashmera & Krushna were the first to perform. A good performance but could have been better. Though they got good comments from the judges, the scores didn't say much.. Next came Karan-Amita. Though their concept was good, the jodi lost touch at 2 occassions through their performance, hence lost out on the scores as well. Karan is a good dancer, but Amita needs a lot of practice..and they need to practise together. Lack of coordination & chemistry are the main reasons their performance suffers. Alex & Sweta were up next. Once again, the jodi performed well..with some good comments by the judges followed by good scores. Sweta-Alex sure take the cake for being the most consistent jodi so far!

Pooja-Hanif's performance took everyone's breath away. Their's was the perfect performance - perfect coordination, perfect chemistry with the perfect song - 'Suraj Hua Maddham' - and they just couldn't go wrong! They got some fabulous comments followed by the perfect score! Karan-Kavita's performance, though subtle and well performed, could not impress the judges much. Rakhi 'red hot' Sawant & Abhishek Awasthi were next, who once again floored the judges with a close-to-perfect performance. Their performance had it all..good choreography, fantastic chemistry, and the required dose of passion & sensousness. Great going! 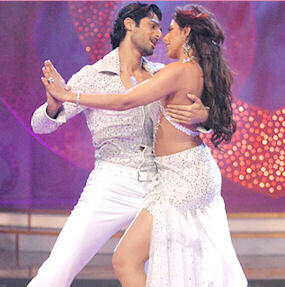 Vikas-Amita, though steadily improving, are yet unable to touch the mark. Vikas is a good dancer, but Amita needs to work hard on her expressions. Nevertheless, a wonderful jodi and always a pleasure to watch. Last, but not the least, were Aamir-Sanjeeda. After slipping to the lowest scores last week, they had to make a comeback. They did..and how! Aamir-Sanjeeda's mindblowing performance floored all the judges..and touched everyone's hearts. Once again, brilliant choreography coupled with the jodi's awesome chemistry and oodles of emotion, had everyone say that Aamir-Sanjeeda are definitely amongst the top-rated performers on the show.

This week, a new concept was introduced - that of 'Choreographer of the Day'. Every week, a choreographer will be awarded for their uniqueness & creativity, which will be decided by Vaibhavi Merchant. In its first week, the award went to Arun & Chetan..choreographers to Aamir-Sanjeeda, for their awesome choreography which resulted in the jodi's awesome performance.

Truly, a star-studded episode..with not just Shiney Ahuja & Vidya Balan, but also Pooja Batra, present on the sets to cheer her friends, Kashmera & Krushna. Also amidst everyone, was a little star..Pooja Bedi's daughter, Aaliya, who didn't like, but loved her mother's performance!

If the stars descendence for the performance episode, were not enough..the elimination episode had more! Shaan, along with his lovely wife Radhika, shook a leg to a medley of his own songs. Then came Karishma Tanna, who replaced Juhi Parmar for the Talaash-E-Baliye contest which gives any one person from the audience, a chance to participate in the show with Karishma as his partner. Besides being a good dancer, the one chosen, sure needs to be tall at 6 feet & above! 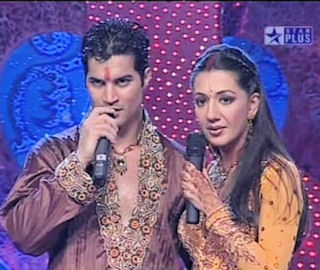 After the performances..it was time for the moment of truth - eliminations! One by one, the jodi's in the safe zone were announced..and the 2 jodi's left in the danger zone were Karan-Amita & Vikas-Amita. A sweet moment, when Amita (Vikas' wife) announced that she would rather get eliminated and have her 'Bachchoo' (Karan) stay in the competition. The judges felt that Karan-Amita would & should get eliminated, but the audience did not agree. It came as a shock to everyone when Vikas-Amita's names were announced as the jodi eliminated from the competition! Sad, but truly, a very graceful exit by the jodi. Hope to see them back in the wild-card round! Overall, an exciting episode with some new elements introduced and stars shining bright!

In the coming weeks, hope to see some more wonderful performances, with themes that truly make us all think - 'yeh nach nahin aasaan'! Tune into Telly Buzz next week, for all the exciting happenings on Nach Baliye 3! 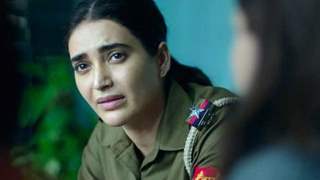 + 3
14 years ago Eks, fabulously written article, loved every bit of it..

14 years ago but something is not clear

Karishma Tanna is coming with the audience selected partner only for the final episode.

14 years ago I guess I'll have to watch this episode... sounds interesting!

14 years ago Touch baliye theme was awesome I really enjoyed watchig it Hope that in coming weeks audience gets to see some wonderful performances.