With 'chhed-chhad' as the theme, the couples', the judges & the audience were in for some masti and fun on the dance floor! Some delightful performances coupled with some shockers was what made up the 3rd episode of Nach Baliye 3!

Gaurav-Narayani's spirited performance set the stage for things to come. Karan-Amita began the proceedings with a performance that left everyone surprised..and the audience wanting more! After receiving flak for their earlier performances, Karan-Amita were all smiles with the judges' comments & scores. Karan was a delight to watch, imitating Bollywood stalwarts like Amitabh Bachchan, Shatrughan Sinha, Jeetendra & Dev Anand. Great beginning to the episode! Sweta-Alex followed it up with another lovely & consistent performance and were praised for the effort put in, especially by Alex. Vikas-Amita brought alive the Mughal era with a delightful Salim-Anarkali act. Amita won a thumbs up from the judges for her improvement..though ofcourse, she has a long way to go yet!

All the couples truly seemed in their elements and were all out to have some great fun! Pooja-Hanif are turning out to be the proverbial 'dark horse' in the competition, with some consistent performances. Their act (with the ongoing cricket & hockey frenzy that has swept the nation!) was the right mix of dance coupled with the theme of 'chhed-chhad' which won them praises from the judges and some brownie points for their choreographer, Sumit! 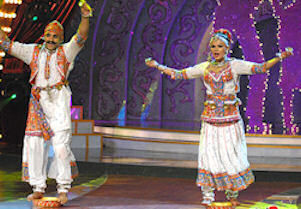 Featured Video
Definitely the best performance of the evening came from Rakhi-Abhishek! Performing to a classic, is never easy. And dancing, rather balancing oneself on 'thaalis' is certainly no mean feat, but Rakhi-Abhishek managed to pull off a difficult song-dance routine. An extraordinary performance, that had the judges lavish them with praises and the, rightly deserved, perfect score!

After last week's dismal performance, Krushna-Kashmera had to bounce back! Their performance, though appreciated by the judges..in one word, was - loud! Kavita-Karan did a take-off on the famous Rakhi-Mika 'kiss' controversy, which certainly did not go down too well with the lady in question, Rakhi Sawant! While some felt it wasn't right to ridicule Rakhi in such a manner, others believed it was meant to be taken in the right spirit..that of fun! Karan-Kavita's act..right or wrong..sure got them the praises after a dismal performance last week.

The shocker of the evening came from Aamir-Sanjeeda. After a stupendous performance last week, and top scores..this week, they were right at the bottom with the lowest scores! Vaibhavi pulled up their choreographers for 'bakwaas choreography', while David Dhawan & Isha Koppikar said the concept was something no one understood and did not come across clearly. A very disappointing act coming from one of the most promising jodi's! Hopefully, this will only help them bounce back.. 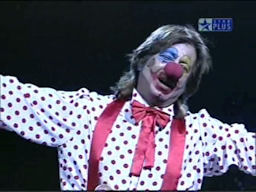 Last but not the least, was Shakti Kapoor sans his wife Shivangi..again! It was time for the judges to take a call as Shakti Kapoor performing solo, was unfair to the other contestants. Before the judges could announce their decision, Shakti Kapoor announced he was opting out on his own. But not before one last performance.. a performance that touched the hearts of one & all. Shakti Kapoor's rendition of Raj Kapoor's 'Jeena Yahan Marna Yahan' had the audience & judges in tears. Truly, a sad exit..but the right decision.

One by one, the jodi's in the safe zone were announced, and Sweta-Alex & Vikas-Amita were the couple's in the danger zone. So who was to get eliminated? Celebrity guests, Udita Goswami & Rahul Khanna, were given the onus to announce the name of the eliminated jodi. After some nail-biting tension, Udita Goswami announced there were no eliminations for the week! Overall, a mixed bag episode..some highs, some lows..and fun too, somewhere in between!

Dance ofcourse, and lots of drama! Nach Baliye 3 promises all that & more.. Stay tuned to Telly Buzz next week, for more excitement & happenings on Nach Baliye.

KingBada 14 years ago yo dude you gona ruck bollywood. you are gona be a star

am doin performin arts in school n am like avin 2 focus on music, didnt even get 2 choose wat we wanned 2 do

14 years ago Wow... Its seems all the jodis rocked this time.. But what happened to Aamir and Sanjeeda yaar.. Very disappointed

14 years ago aamir and sanjeeda's perfromence was really dissapointing. shakti's performence was verry touching but what I think was shivangi never wanted to paticipate it NB so all the sickness and stuff was act just so they can back out.

14 years ago Hey guys ... does anyone know when NB3 will be shown in UK?? Also im not familiar with the actors real names so can anyone give me a heads up on whos who in NB3???

14 years ago Gaurav Narayani's performance and expressions and high note steps did create the tempo of the show! Good work!