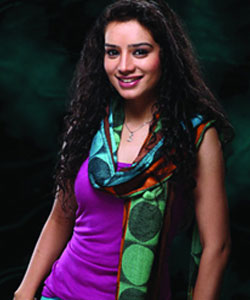 Star One's Pyaar Kii Ye Ek Kahaani, produced by Balaji Telefilms will see a major twist in the coming episodes which will reveal that Mythili is still alive.

A little birdie tells us, "Mythili, the look-alike of Pia (Sukirti Kandpal) has been kept alive by Siddharth (Siddhant Karnick) for so many years. Siddharth on a certain pretext will bring Pia to the place where Mythili is kept alive; and when Pia sees Mythili, Siddharth will put Pia in a coffin. At the same time, Misha and Prachi happen to come there. Mythili who has become bitchy now and wants to get Abhayendra at any cost uses her powers and transforms herself as Pia and appears before Misha (Priya Wal) and Prachi (Vahbbiz Dorabjee). More problems creep up for Siddharth when T (Madhura Naik) captures in her mobile the pictures of Siddharth's interaction with Mythili. This is when Siddharth ties T to a pillar and plans to eat her up as a snack".

We hear that the dual role of Sukirti will be in full swing now, and it will basically be a clash between Pia and Mythili for Abhay (Vivian Dsena).

If sources are to be believed, Pyaar Kii Ye Ek Kahaani is proceeding towards a small leap of say one year which is slated to happen by the end of May.

We tried contacting Sukirti Kandpal but she remained unavailable for comment.

no one could hve played pia better than u