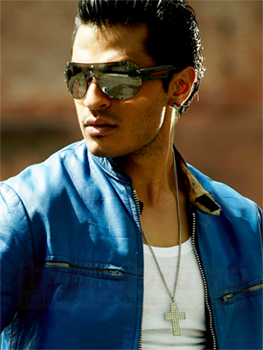 Featured Video
Q. What's the story line of your upcoming film 'Let's Dance'?
A. As the title suggests, the movie revolves around dance. The story is focused on the dream of a girl who is a choreographer by profession. I am playing the character of Rehan Jain who is an amateur dancer and the girl trains and helps me to reach to the top. And during this journey, we fall in love with each other. Although the girl likes me, she can't accept the fact of me coming from a poor family. The movie also focuses on how kids come out of drugs.

Q. Tell us something about your character…
A. As I said, I am playing Rehan Jain who belongs to a poor family. It has both positive and negative characteristics. You can say that my character is very near to the one played by Jackie Shroff in Rangeela. Frankly speaking, I feel lucky to have got such a strong character in my debut film itself.

Q. How is your relationship with your co-star, Gayatri Patel, on and off the screen?
A. Like me, even my co-star Gayatri Patel is making her debut with this film and we have had a great time with each other, both on and off screen. I must say she is a talented actress and a superb dancer too. She has glimpses on one of my favorite actress, Madhuri Dixit in her.

Q. Who do you look upon to when you need any suggestions?
A. I am lucky in that sense to have a lot of people around me, whenever I need any kind of help. Amrita Arora, Malaika, Arbaaz, Salman bhai, Sohail bhai have always stood alongside me and supported me to pursue my career in Bollywood.

Q. Do you find yourself more comfortable in cricket or acting?
A. Since my childhood, cricket has always been my top-most passion. It is something which comes natural to me. When it comes to acting, you can say that it's an acquired passion for me. I have to go a long way in learning the art of acting.

Q. When did you realize your hidden acting skills?
A. See, it's nothing like that. After having walked on the ramp for acclaimed designers like Wendell Rodericks, Vikram Phadnis and Manish Malhotra, it was Amrita (Arora) who advised and convinced me to try my luck in Bollywood. Even I getting into modeling was Amrita's idea.

Q. When is the film slated for release?
A. We still have a one-month shooting schedule to complete the film. If everything goes well, then we may expect the film to get released around June (08). I hope audience likes the film when it hits the silver screens.

Q. Any other projects you are working on?
A. At present, I am just concentrating on Let's Dance.

Sangeeta Bijlani and Jackie Shroff to be seen as special judges on ...