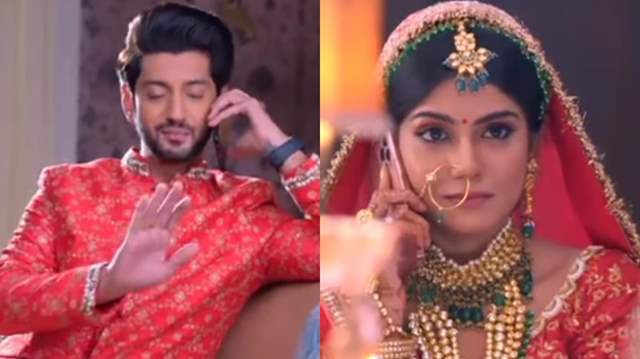 Colors show ‘Muskurane Ki Wajah Tum Ho’ is gearing up for a major twist. The show revolves around Kabir falling deeply in love with Katha. He is ready to accept a pregnant Katha. He is determined to teach lesson to the person who wronged her. Kabir is unaware about the fact that his brother Yuvraj is the one who cheated on Katha. Yuvraj learns about Kabir choosing Katha to get married and is determined to stop this union.

In the previous episodes, Yuvraj has been trying religiously to stop the wedding but in vain. In the upcoming episodes, Yuvraj splashes juice on Kabir’s clothes so that the wedding is delayed. Yuvraj asks Kabir to go his room and change his clothes, but Kabir disagrees. Yuvraj saves Kabir from getting hurt, as a pillar is about to fall on him. Kishore jiju also gets hurts while saving Kabir. Katha runs towards Kabir as she notices he is going to get hit by the pillar. All the pillars fall on the ‘havankund’, and Kabir gets hurt.

Furthermore, Kabir sits beside Katha as he gets injured. The priest tells the family that this is not the right time to get married. However, Kabir disagrees, he lifts up Katha and completes the marriage rituals. Yuvraj, who also gets injured, escapes the hall. Everyone blesses the new couple.

‘Muskurane Ki Vajah Tum Ho’ is produced by Cockcrow and Shaika Films. The show has a stellar star cast including actors like Kunal Jaisingh, Tanvi Malhara, Abhishek Malik among others.

Aish 2 months ago Katha can't act. Her expressions are merely same across scenes or simply weird. Character is strong but her acting is total lacklustre unfortunately.