Singh Is Kinng has become the new rage amognst audiences as the music by Pritam is topping the charts everywhere! Full of punjabi music with a hint of rap and flavors like singersDaler Mehndi, Shreya Ghoshal, Rahat Fateh Ali Khan, and Hard Kaur make this album a must buy! 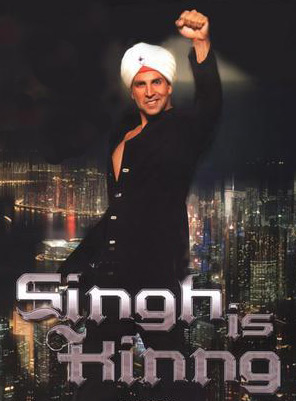 The first song of the album - ‘Singh Is King’ is a highly energetic song which has a new flavor combining bhangra with hip-hop by the famous international artist Snoop Dog. Praising the Singh Sardars with a turban, the track is well composed and has an addicitve tune that really catches on and makes one want to start dancing. Akhshay sings well in the song and Hard Kaur's rapping is also strong and energetic adding to the track and making it a great song.

The next soundtrack 'Jee Karda' is truly one of the highlights of this album. The mix of Latino influenced vocals sung by Labh Jan Jua and Suzie Q really make this song unique. Discos and pubs will be rocking with this song as its a fun feel and enjoyable track and the lyrics hardly seem to matter due to the fast paced and energetic tune of the song.

'Bas Ek King', the next track, has vocals by ace singers like Neeraj Shridhar, Ashish Pandit and Hard Kaur. Another energetic dance number, this song is another one one that will rock the dance floors. The remix of the song is also enjoyable and has some extra rapping by Hard Kaur who seems to be everywhere these days!

The next song is 'Bhootni Ke', once again a fun filled punjabi number, is filled with the energy of the dhol. Sung by the King of Bhangra, Daler Mehhndi the song is a bit disappointing as it comes across as ordinary in comparison to the rest of the songs in this album. The remix version of the song by DJ Amyth and the second remix titled "Tiger Style Mix" sung by Mika come across as a bit strange and they really butcher the original track! 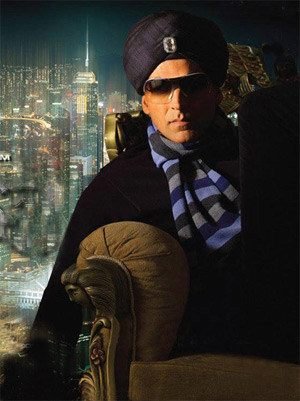 'Teri Ore', is a beautiful melodious romantic love song sung and the first non-dance number of the album. Sung by Rahat Fateh Ali Khan and Shreya Ghoshal, the vocals are beautiful and truly filled with alot of emotion. The lyrics of the song are really memorable and the musical arrangements by Pritam really make this song a must hear for audiences. The remix version of the song replaces the slow romantic beats with more fast paced tunes and may work with those who enjoy faster paced songs.

The next track‘Talli Hua’ takes us back to the pub though the lyrics of the song are abit disappointing. Its an average song which does not live upto the other great numbers in the album. The remix truly has too many beats and too much rapping which become a headache for the listener and it could have truly been skipped!

Singh Is Kinng is truly a good album minus the remixes which really makes one wonder why they were forced into the album in the first place. Singh Is Kinng though will definitely take Punjabi Music internationally as it will be a big hit in discos and clubs across the world! Don't miss this album as its a must hear for music lovers!

Bolly Curry Rating: 3 1/2 Stars Out Of Five. Energetic and great fun filled tracks but the forced remixes could have been avoided.