Welcome to another take of Music 'N' Masti as we wave goodbye to the old tracks and showcase the hottest new songs in B-Town this week! 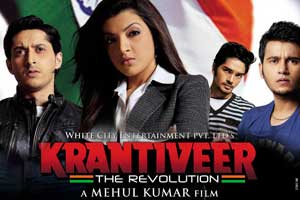 Film: Krantiveer - The Revolution
Singers: K K, Shreya Ghoshal
Music: Sachin-Jigar
A new entry this week in the form of Khuda Mere Khuda. While the rest of the album, sadly, has not clicked with the audience; this light performance from the wonderful romantic duo goes on to become a pleasant listen.

Film: Khatta Meetha
Singer: K K, Sunidhi Chauhan
Music: Pritam
This weeks new entry is romantic duet by favourites KK and Sunidhi Chauhan.  The beautiful lyrics and the simplicity of this track lend to it a certain charm that is lacking in the remix version.

Film: Raavan
Singers: Vijay Prakash, Mustafa Kutoane, Keerthi Sagathia
Music: A R Rahman
This one clearly carries the A R Rahman stamp! Whilst situational (and no doubt impressive on screen) Behene De is a delightful combination of the maestro's music and some excellent voices.

Film: Raajneeti
Singers: Mohit Chauhan, Antara Mitra
Music: Pritam
As melodious as it is foot-tapping, and beautifully crooned by Chauhan. Unexpectedly romantic in an album which belongs to a world of dirty politics et al ..

Film: I Hate Luv Storys
Singers: Vishal Dadlani
Music: Vishal-Shekhar
A track that is light on the ears and well-sung by Dadlani.  It has quickly become popular with music fans despite it's relative lack of lyrical depth as such.

Film: Kajraare
Singers: Himesh Reshammiya
Music: Himesh Reshammiya
Himesh's Rabba Luck Barsa replaces his Kajra in this week's charts.  For Himesh fans, this is a goldmine of the sufi-funk and nasal twang style Himesh is coveted for.  For others, the music and lyrics are commendable and work with the Arabic culture and Urdu lyrics beautifully.

Film: Lamhaa
Singers: Chinmaye, Kshitij Tarey
Music: Mithoon
A new entry this week with the come back of Mithoon - composer of Anwar and Bas Ek Pal.  Madno is a beatifully soothing track that keeps orchestration at a minimum to further highlight the pleasant melody and great vocals.  This song makes an impact that won't be forgotten quickly!

Film: Raavan
Singers: Rekha Bhardwaj, Javed Ali, Anuradha Sriram
Music: A.R. Rehman
We aim to please! Khilli Re is swapped for the popular Ranjha Ranjha of the same album. A folksy based song reminiscent of the magnificence that was Taal, Ranjha is an energetic and exciting listen.

Anything we're missing?
Let us know your favourite songs this week and you may just find it in the next week's charts!