View Profile
It was hard not to fall in love with the nutty Circuit and his brainless antics. Now Arshad Warsi, the Bollywood actor who played the character effortlessly in the two hit Munnabhai comedy films, says part three will go on the floors in 2010. 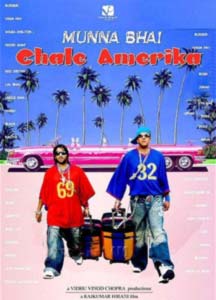 Featured Video
"Munnabhai Chale Amerika will go on the floors next year and we'll start shooting then onwards," said Arshad.


The actor, who will reprise his role as the rugged but loveable goon in the movie, also said that "everything", including the script, "is ready for the film".


Produced by Vidhu Vinod Chopra, the third instalment in the hit series will also be directed by Rajkumar Hirani who helmed the first two films, Munnabhai M.B.B.S. (2003) and Lage Raho Munna Bhai (2006).


The film was held up after Sanjay Dutt, who essayed the title role of Munnabhai, was convicted for illegal possession of arms in connection with the 1993 Mumbai blasts. But now the actor is out on bail.


Arshad, who forayed into filmdom with Amitabh Bachan's home production Tere Mere Sapne in 1996, hit the jackpot with the Munnabhai series. While Sanjay Dutt played the title role, Arshad was seen as his accomplice and their onscreen chemistry and comic timing succeeded in tickling the audiences' funny bone.


Talking about his camaraderie with Sanjay, the 41-year-old said, "Sanju is a zero complex guy. He has no issues with anybody or anything. He is also not insecure like other actors who'd get other actors' scenes chopped to keep their own part. It's just too cool working with him and that is why our comic timing and everything match."


Asked if there were any other actors he liked working with, he said, "I have fun (onscreen) with Riteish (Deshmukh), but Ajay (Devgan) and I are completely mad when we are together."


Arshad's next is Short Kut - The Con Is On that releases July 10. Produced by Anil Kapoor, the film has been directed by Neeraj Vora and also stars Akshaye Khanna and Amrita Rao.


The film is actually not an out and out comedy...it's got a story and it's dramatic. But I bring in the humour in the film despite the fact that I am the villain and I play a bad guy. Akshaye and Amrita are the hero and heroine in the film," said the actor, who was last seen in the dud Ek Se Bure Do.


After the success of the Munnabhai series, Arshad has mostly been seen in comedies like Golmaal Returns, Sunday, Dhamaal and Golmaal: Fun Unlimited.


When asked if doing comedies was a deliberate choice, he said, "There's nothing I can do. I don't have a choice...most of the scripts I get are comedy scripts. There are hardly any serious films coming my way. I'm a pretty good actor and I'm comfortable with both serious and comedy films. I'm not deliberately doing comedies."


"Moreover, there are only comedies being made. Out of 10, eight films are comedies. But as long as the script is good, I'll do it. I don't let a good character and a good script go," said the actor who got critical acclaim for his performance as a police officer in the crime thriller Seher.


His other future projects include Ishqiya and Kaun Bola and he is also waiting for part three of Golmaal.


Despite a mixed career with a subdued initial start, Arshad said, "I'd never regret anything in life".