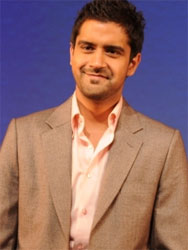 Kavi Shastri aka Rohan Mehra of Sony and YRF TV's Rishta.com, tells us the story of this typical NRI boy who comes to Mumbai in search of realizing his Bollywood dreams. But just like the way every dream brings with it its share of hurdles, Kavi had to hop over many until he bagged this role.

Kavi tells us, "The most difficult part about following my dream was to relocate to Mumbai. I had to leave everyone I know- my friends and family back in London and had to start all over in Mumbai. The initial six months were the toughest. Add to it the fact that my Hindi is bad, very bad."

However things brightened up and Kavi started to like the humdrum of daily-life in Mumbai. He says, "I started going for auditions which helped to break the feeling of being alone in this city. And for the past eight to nine months I've been shooting for Rishta, so that's helped me overcome my homesickness a lot. I've made a great bunch of friends here on the sets. Now I can say that Mumbai is my home and London is my vacation home (smiles)."

Kavi has been influenced by a variety of actors both from Bollywood and Hollywood. He says, "I like to watch and learn from actors like Saif Ali Khan, Amitabh Bachchan, Robert De Niro, Al Pacino, Amit Channa and Ray Winsten."

So which on-screen character can he most relate to? "Amitabh Bachchan in Chupke Chupke," Kavi signs off.

psingh3 11 years ago want to see u again.
I m missing u.
Hope season 2 of rishta was there.
Atleast come in some another soap.

12 years ago he is a reallly good actor. never knew he wasnt from india.

+ 5
12 years ago He's so cute and super sexy! I love his accent! He tries to hide in on the show but sometimes it will spill out and I just melt! Oh, he's so sexy!!

12 years ago no wonder he mentioned saif ali khan..he played one of his friends in love aaj kal...
though he is doing a really good job as rohan..keep it up...

12 years ago Thank yu!
I love his actin and he fits perfectly as rohan!
n cute(: Lol