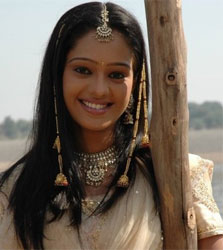 For the uninitiated, this show which was earlier titled 'Ramlal' was to be launched on 9X, but unfortunately that did not materialize. However, when asked Producer Tony Singh about the same, he rubbished this and said, "Ramlal is a closed chapter. Nanhi Pari is a new concept planned keeping the channel COLORS in mind. However, we have retained the same cast of Ramlal in this".

Well, if the entire cast of Ramlal has been retained, wonder why the then-decided female lead of Ramlal, Menka Lalwani does not feature in the new project? According to our source, "Menka was earlier seen in the promos of Ramlal, and she had already shot for few episodes. However, she has not been taken for the new show, and Mughda Chapekar is all set to play the female lead in Nanhi Pari".

Another source claims that, "Menka has not even been informed about the replacement, and she was not aware of the changes made in the title as well as the female lead".

When we called Mughda for a confirmation, she says, "I gave audition for Nanhi Pari and I got the role. I really don't know about what had happened earlier".

We tried calling Menka to listen to her grievances, but she was unavailable for comment.

As for now, we wish both the incoming Mugda as well as the outgoing Menka all the very best for their future!!

+ 2
13 years ago i love this song, i made a video mix on my baby cousin.. everyone loved it..
this show sounds interesting...but too bad cant watch this show as i dont have colors

+ 5
13 years ago Well, The Promo is Very Promising and Looks Very Good, I am going to watch the Show and Plus Mughda is Looking Very Cute in the Promos, So Looking forward to it after all this will be the First COLOR Show I will be Watching !

+ 3
13 years ago welcum bak mugdha!
i m sure her presence in the show ll surely take it 2 new heights...