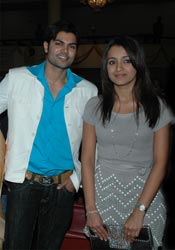 Not many know that Ganesh Venkataraman, who plays the Romantic lead opposite Trisha in the Moaserbaer film Abhiyum Naanum is a former Gladrags Mr India. Everyone knows that Trisha was a former Miss Chennai. So the two bonded very well during the making of film, recounting their modeling days. Both are fitness freaks as well and had a lot to discuss post shoot.

Trisha is the top heroine of Tamil and Telugu films currently, so playing the hero opposite her is obviously a great start for Ganesh. The buzz is that the chemistry between the lead pair is something to look out for in the film.
Quiz Ganesh on the kind of films he would like to do he says "Well people tell me that the Romantic Hero image goes very well with me, Personally I want to experiment with all kind of roles, I am well trained in Martial arts so action films are also on the agenda".
The story and Ganesh's character have been kept a well guarded secret so far. After Mozhi the expectations with Abhiyum Naanum are also very high. So we will wait and watch this 'new pair' in Kollywood sizzle on Screen. in the meantime, the buzz is on about Ganesh being shortlisted for a big banner flick. looks like we will see the Bollywood silver screen presence of this young hero soon...