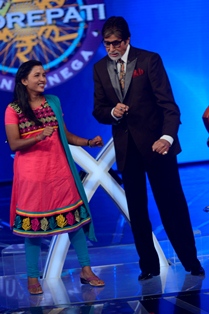 The episode starts with roll-over contestant, Kaushalya Kumari. A teacher from Bhojpur, Bihar; Kaushalya is a big fan of Dev Anand when she was 12 but when she came to know that he is married, she tried to commit suicide but at that time she saw Amitabh Bachchan on television and fell in love with him. Kaushalya wanted to come on the hot seat to win money so that she can get her elder sister married.

Coming from a conservative background, her sister couldn't get married because of dowry. In awe of Mr. Bachchan, Kaushalya fulfills her wish of dancing with AB and hugging him. The next contestant is Antar Singh.

A Jat from Haryana, Antar Singh wants to win money so that he can buy land. In his hometown it is believed that a man is worthy to be married only if he has a land. Fond of cracking jokes, Antar Singh along with a few friends runs a Pragatishil Yuva club which takes care of the expenditure for girls for employment. He also shares that he would like to marry Deepika Padukone because she is tall, just like him.
1 Likes

atominis 6 years ago Indians are too attached to their screen idols.