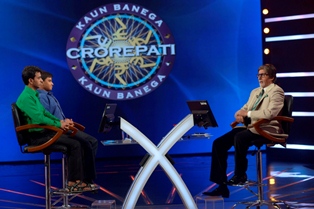 The episode starts with roll over contestants Anurag Sharma & Shubham Sharma from Bareilly ( UP). The brothers get stuck at one question and at that moment Anurag suggests that if he swaps places with AB may be he will get the correct answer. AB sportingly agrees and sits on the contestants place instead.

The change in seats takes place and AB becomes the contestant for a while whereas Anurag becomes the host of the show. Anurag enacts like AB and ask the question in the same manner AB asks. A fun moment takes place of swapping and then after a while AB says that see even I don't know the answer till the time you lock it so let's just get back.  The two go back to their original seats. Anurag Sharma shares that his favourite actress is Aishwarya Rai Bachchan and wishes to talk to her on the phone.

AB connects the call to Aishwarya and Anurag shares a moment with Aishwarya that once he had gone to his friends place he told prayed to her picture. Ever since his friends used to fight claiming to be the biggest fans of Aishwarya. After hearing this Aishwarya replies that she is really grateful for fans like them and wishes them success.