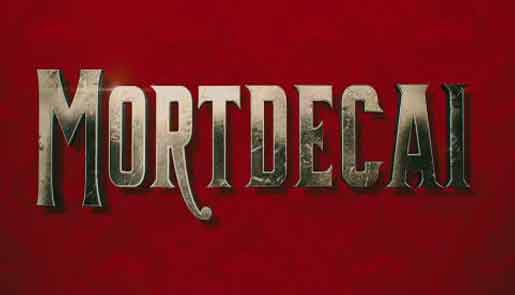 Director David Koepp's latest comic caper 'Mortdecai' is about an eccentric art dealer who is also a "known trafficker of stolen art".

The film, based on British novelist Kyril Bonfiglioli's 1973 published novel, "Don't Point That Thing at Me," is flighty, frothy and hardly funny!

Charlie Mortdecai (Johnny Depp) who is married to an aristocrat Johanna (Gwyneth Paltrow) is a spineless, inept and insolvent art dealer who believes that he is debonair. He survives through art-related con jobs and is supported in his endeavours by his man Friday, Jock (Paul Bettany).

The plot revolves around "chasing a Goya painting." The canvas rumoured to contain the code of a lost bank account filled with Nazi gold goes missing after the death of a painter. British intelligence service MI5 agent Martland (Ewan McGregor) who has a soft corner for Johanna reluctantly recruits Mortdecai to assist in their search for the treasure.

To make matters worse, there is terrorist Strago (Jonny Pasvolsky) and American billionaire Krampf (Jeff Goldblum) who want the painting for themselves. And, there is Georgina (Olivia Munn), Krampf's nymphomaniac daughter who has designs on Charlie. Through a series of decoys and double crossing across continents, the ensuing eventuality is obvious.

Like the novel, the film script too is complicated, silly and full of dubious and impulsive digressions. It lacks solid jokes.

The humour falls flat because it is over-egged with all sorts of stereotyped absurdities. The quirky characters are pseudo, pretentious and dramatic with various accents.

Similarly the dialogues, except for a few funny lines, are verbose and repulsive in general.

Each scene seems staged and Koepp's direction is comically amateurish with the actors giving an overtly theatrical performance.

Johnny Depp makes a good impression as the moronic, but at the same time outrageously roguish Mortdecai, who is obsessed with his absurdly curled and comic moustache. Unfortunately, after seeing him in the various comic roles with outlandish get-ups in his earlier films, his Mortdecai, formed entirely of mannerisms, is ineffective. Depp pairs up well with Gwyneth Paltrow but their onscreen chemistry lacks the depth of a loving couple and hence their performances seem forced.

Similarly, the equation between Gwyneth and McGregor is shallow and frivolous. Their scenes feel cold and calculated. Their performances leave no impact. But independently, McGregor delivers. So does Paul Bettany as Jock, the ever obliging servant. On the other hand, Olivia Munn is wasted due to her poorly crafted character graph and short screen presence.

With a good and well designed production quality, Cinematographer Florian Hoffmeister's frames beautifully capture the vintage hue. But these images are marred by a few edit flaws and the tactlessly compiled computer generated graphic images of the cities.

Overall, "Mortdecai" is truly a huge let down!