Just to hear these roguish, duplicitous characters walk the talk is a pleasure beyond the ordinary. Make no mistake. "Dedh Ishqiya" walks many extra miles beyond your highest expectations. It negotiates a nawabi era long gone, or perhaps never in existence. And it does so with a bracing bewildering beguiling blend of aristocratic arrogance and ironic humility.

Welcome to the world of quaint contradictions. This is Mehmoodabad, a place close to yet far from Lucknow where time stops still. Where mushairas and mujras jostle with very contemporary preoccupations, like making fast bucks.

The one thing that can be said with supreme certainty about "Dedh Ishqiya" is that you've never seen such a marriage of old-world charm and new-world subterfuge before.

Who in his right mind except the utterly wacked-out Babban (Arshad Warsi) would say, "Tumhari saari nawaabi, tumhare pichwade mein ghused dunga," and get away with it? Yup, nawaabi gets its twinkle-eyed comeuppance in this tale of the fading Begum (Madhuri Dixit) and her besotted suitors.

There is a delightful sequence in Madhuri's mysteriously-lit i 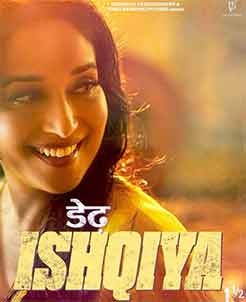 nner chamber where Naseeruddin Shah and Madhuri exchange courtly confidence while their respective sidekicks discuss the pluses and minuses of latest I-Phones.

A sequence such as this draws out the dynamics of the old and the new world, and the ideological clashes that define life in certain cultures which are defined not so much by contemporary existences as by nostalgia.

This is a world that exists only as an idea. Director Abhishek Choubey gives a tantalising tangibility to the non-existent world in this boudoir-based burlesque where autumnal characters filch resplendent Urdu poetry from their peers and pass it off as their own to gain brownie points with the beauteous patroness of the fine arts, who incidentally is not quite what she seems. But hush!

Without giving away the plot I'd like to say nothing is as it seems.

The roguish deceptions of two of the four principal characters, Khalujaan (Naseer) and Babban are known to us from the first film "Ishqiya", in which the Naseer-Arshad duo more than met their match in the spunky Vidya Balan.

The location has now changed. And so have the female protagonists. The rustic cow dung compulsions of Balan's burlesque in "Ishqiya" are now replaced by the decorous ambrosial but decadent tragic aristocracy of Madhuri's character - Begum Para.

When we first meet Begum Para, she strikes us as a beautiful anachronism. Honestly, this is a 'Para'-normal situation! Madhuri's lahja, tehzeeb, adaas, aahen gile-shikwe remind us of Meena Kumari in "Pakeezah". But the lady has a past, and a future. She is no walkover, although she pretends to be one.

Her lady-in-waiting (a very Shakespearean touch, that) is played by the exorbitantly sexy Huma Qureshi, who is growing into one of our more engaging contemporary actresses.

I really can't imagine anyone but Huma bringing the same spirit of libidinous chutzpah to the character. She is in many ways superior to the film's main attraction, Madhuri who I felt struck some wrong notes in her character's 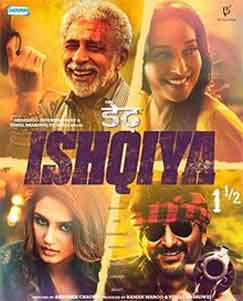 But when Madhuri dances to Birju Maharaj's choreography we tend to forget and forgive all the false notes in the characterisations.

We revel in the raga of a romance long gone-by.

The writing in "Dedh Ishqiya" and the Urdu dialogues are among the best we've heard in Hindi films of recent times. The language is a ravishing blend of the sublime and the smutty. Never experienced, never felt...

The actors are supremely in characters. Naseer with his wizened face and twinkle eyes conveys the full weight of delayed ecstasy felt by a man belatedly in love. If recently you've forgotten this actor's calibre, here's your chance to re-discover it.

The inimitable Gulzar has a load of fun writing the songs. This is a world of poetry and music where there is room for both Begum Akhtar and Yo Yo Honey Singh.

Giving Naseer tit for tat in every scene is that bundle of implosive talent Arshad. Kohl-lined eyes, and a sweeping vista of mischievous expression qualify Arshad's performance. Indeed there is more ice and fire, courtship and lust, in Warsi's scenes with Huma than there is in the temperate toned-down mock-tragic togetherness of Naseer and Madhuri.

The film is outstandingly photographed by Setu and edited by Sreekar Prasad. Both technicians here turn into artistes, who must bring into play the thumris of Begum Akhtar and the thumkas of Huma...a task easier said than done.

"Dedh Ishqiya" is at least 'dedh times' more delectable, saucy, audacious and amorous than "Ishqiya". It constructs the dynamics of love and redemption from the rubble of a lost world.

It gets its indomitable storytelling power from the writing and dialogues. The four principal actors, as well as Vijay Raaz and Manoj Pahwa, imbue broad and bright shades to their fey characters. Here's a world of poetry and parody that never co-existed anywhere else.

The world created by Choubey is at once archaic and immediate, frozen in time and yet laden with molten emotions. This is a work suffused with a sighing splendour, giggly groans and yes, a zingy 'zubaan' that yokes 'shayari' and colloquialisms.

What an enticing start to the year!