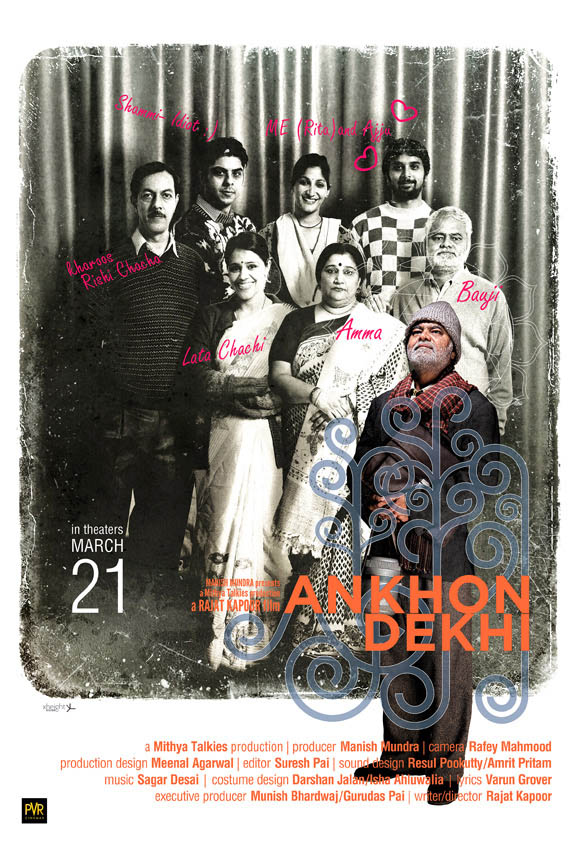 Pleasantly Bollywood is not all about dancing around trees and kicking villains to make them fly. There is one genre that gets skipped or over looked very conveniently, and that is off-beat cinema. There so many films that are made of these kinds, are critically acclaimed but don't get any audience attention sadly. Rajat Kapoor's Ankhon Dekhi is one such splendid piece of cinema, which hopefully gets its share of appreciation from the critics as well as the audience.

Ankhon Dekhi is a story about Raje Bauji, a man in his late fifties, living out a dreary but eventful life in a small house in old Delhi where he lives with his extended family. But things don't quite turn out the way they were supposed to. He takes a tough call; he decides that he would never believe what he has not learnt through his own experience. The only truth for him would be the truth of his life, the truth that has passed through the verifier of his senses. He takes on that difficult journey, where he would be called a mad man, a saint or most often, just a fool. All of it, but he is steadfast on his path.

The most intelligent, move by Rajat Kapoor is that he did not take up the lead role, because the justice Sanjay Mishra has done to the character of Raje Bauji is simply impeccable. Rajat Kapoor does a splendid role in his writing direction as well as in the role of Rishi. Other members of the cast do their share very well too. At no time does any of the character over power the central character. Kudos to the writing for that.

Other technicals of the film are in sync with the mood of the film. Rafey Mehmood's cinematography is very simple and calm; He doesn't make the film visually jerky and does justify the plot. Sagar Desai's music is pleasant and has a lot of use of Indian instruments in it. Suresh Pai's editing is crisp and does not make the movie lengthy.

The movie is worth a watch. It gives you a feeling of how we miss out on some small things in life without knowing how much they really mean to us. All of you who like a little piece philosophy and have an eye for intelligent film-making should definitely go for this one. Do not expect any Maar Dhaad Masala, this is not any of that, but still should be a must have ingredient to the recipe of your perfect weekend.