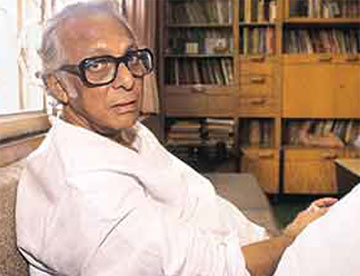 Director Mrinal Sen, rated as one of the pioneers of the alternative cinema movement in the country, turned 90 Monday. He spent the day attending a series of events organised in his honour.

Winner of Dadasaheb Phalke Award, Indian cinema's highest film honour, and scores of international honours for his films known for their experimentation and depiction of middle-class life and various shades of Kolkata, Sen's over-half-a-century celluloid journey produced a clutch of masterpieces whose appeal lie undiminished even today.

He is rated as one of the three - the other two being Satyajit Ray and Ritwik Ghatak - to have made the world sit up and take notice of Indian films.

Beginning his directional career with "Raatbhor" in 1955, Sen has made more than 25 feature films and several short films and documentaries. Some of his noted movies are "Bhuvan Shome", "Ek Din Pratidin", "Akaler Sandhane" and "Khandhar".

He also directed "Oka Oorie Katha" in Telugu language and it was based on Munshi Premchand's story "Kafan".

Sen directed his last film "Amar Bhuban " in 2002 and still says: "I wake up every day thinking I will make a film."

Screenings of Sen's films, discussions and viewing of documentaries on him marked the day.

His films "Akaler Sandhane" and "Ek Din Pratidin" were showcased after the interaction.

The Eizenstein Cine Club arranged an interaction with Sen and the screening of "With Mrinal Sen", a documentary on the man himself.