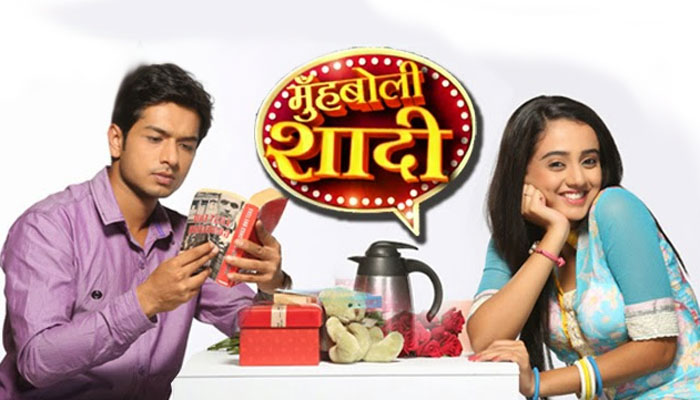 Monday to Friday at 8.30pm only on Sony TV

Story so far: Anmol Ratan Singh (Zalak Desai) is driving car for the first time on the streets of Bariley with her cousin Nidhi. In the excitement she doesn't realize that car brakes are not working and bangs it on a compound wall. Nikhil (Fahad Ali) who was playing with the kids in the lane spots the accident. Panicked Anmol couldn't release her seat belts. Nikhil rushes to her rescue and its love at first sight for both, Nikhil and Anmol. When Anmol's family knows about the accident they get very upset. While searching for Nikhil, Anmol receives a call from her father Ratan Singh (Bobby Parvez) who asks her to return home immediately. Nikhil's father, Ashok Tiwari (Darshan Jariwala) is a priest. Ashok stays with his three sons, Nikhil, Akhil (Meghan Jadhav) and younger Sahil and Ashok's sister Buaji.

Akhil informs Tiwari about their new neighbor and Ashok decides to go uninvited for their Gruha Pravesh' puja. Tiwari have a fight with their new neighbor over a water tank placed in their parking lot. When both the families are having heated argument when Anmol arrives with Nidhi and discovers that it's none other than Nikhil, their new neighbor!! Through the entire puja, Anmol and Nidhi keep talking about Nikhil while on the other hand; Nikhil tries to pacify his angry father.

Anmol later apologizes to him for the fight between their fathers but he says there is no need for it. Anmol is impressed with his mature thinking. Anmol sees Nikhil meeting and hugging a girl and in anger throws garbage on her car. Later she discovers that the girl was Nikhil's niece and Ashok Tiwari's granddaughter. Tiwari calls the police and make Ratan Singh pay fine. When her father asks her the reason why she did it, she can't answer it. Small incidents make her love for Nikhil more evident, but after throwing the garbage Nikhil is bit wary of her. Anmol tries to show her best in front of Nikhil but he doesn't looks unconvinced. Even after repeated attempts Nikhil fails to read Anmol's mind, she decides to be frank with him. Anmol says that she loves him, but Nikhil says he doesn't and asks her to leave. When she asks what's his problem is, Nikhil replies that he is burdened with responsibilities and doesn't have time for love. To teach him a lesson, she cuts off Tiwari house's electricity.

When Nikhil asks for her forgiveness she returns the fuse so he can restore the electricity. Anmol decides to fast for Nikhil's good performance at the exams. But he hardly appreciates her gesture. Time and again Anmol tries to touch Nikhil's heart with her love but he is too caught up in his own family worries. Tired of Nikhil's neglect, Anmol made up her mind to make him yearn for her. Slowly Nikhil also gets attracted towards Anmol's natural charm and innocence. Even in high fever Anmol prays for Nikhil's success at the exam and gets admitted in the hospital due to illness.

Nikhil realizes the extent of Anmol's love towards him. He goes to see her in the hospital and blurts I Love You', to her. But when he sense Nidhi's presence, he says it was due to slip of tongue. Later at home he looked at his life chart and understands that it has to be change. When he again to go see Anmol in the hospital, he confesses his love to him and declares that he has to make a new life plan where there will be place for Anmol and her love. Anmol and Nikhil exchange mobile numbers on papers but their fathers happen to read it. While Anmol and Nikhil are basking in the glow of their new found love, their families are still at loggerheads with each other. Ashok Tiwari is always on the lookout to create trouble for Ratan Singh and his family. Anmol's chachu Pratap Singh (Nasir Khan) spots Nikhil and Anmol going on scooter. Trying to find out who the girl is, Pratap follows them. When Nikhil spots Pratap behind him, he warns Anmol to cover her face with dupatta.

Anmol asks Nikhil to drive faster in order to lose him. Both of them lead Pratap to a crowded place and as they expected Pratap gets stuck in the traffic. Anmol takes Nikhil to a church where they offer prayer, unaware that Pratap has been snooping on them. Pratap tries to click their pictures. Nidhi is worried about Anmol that their secret is about to be blown. When Pratap shows the pictures taken, they can't see the girl's face but her bracelet can be seen clearly. Neelam Chachi identifies the bracelet as one of Anmol's. Before the family confronts Anmol regarding the bracelet, Nidhi removes it from her hand and hides it. Both Nidhi and Anmol pretend that the bracelet is misplaced by the former's friend. Neelam Chachi asks Nidhi, the name of her friend whom she had given the bracelet. Ratan Singh promises Anmol that he will bring same bracelet for her. Instead of all the lies, Neelam Chachi still looks doubtful of the girls.

Tiwari too asks Nikhil of him being continuously on the cell. Nikhil lies saying he is looking out for jobs. When Anmol informs him about Pratap clicking their pictures at the church he gets tensed. She assures him that she will find out about her father's next move. Next day, when she is thinking of how to get hold of the photo, she comes across that day's newspaper on which the same photo is printed. Anmol gets worried what will happen if Ashok Tiwari comes across this. To avoid further problems, Anmol decides to steal newspaper from Tiwari household.

What works: The subject is made for the current youth. It's a fresh love story between Anmol (Zalak Desai) and Nikhil (Fahad Ali). Set up in Bareily, it provides a fresh backdrop to the story. Adventurous and outspoken Anmol makes a refreshing change as far as small screen's protagonists are concern. Fahad Ali represents career-oriented, reserved Nikhil perfectly.  Nidhi offers solid support to these love birds. Darshan Zariwala as Ashok Tiwari does a commendable job.

What doesn't work: Some incidents in which Anmol tries to woo Nikhil looks far-fetched. Avoiding them would have helped the story move faster.

Our take: Nikhil and Anmol's love story is what we see everyday around us and has a realistic feel to it. Anmol who is not afraid to confess her love to Nikhil is what today's girl is about! Muh Boli Shaadi' resonates with today's youngsters and their approach towards love. It's young, fun and also thought provoking. We are positive that this love story will also be well-received by the viewers.

+ 3
6 years ago Thank you very much for this posetive review. I love Mooh Boli Shaadi. With the hit pairing of Fahad Ali and Zalak Desai. And the talented supporting actors : Darshan Jariwala, Bobby Parvez , Meghan Jhadav , Nasir Khan, Diaansh Sharma , and others. It is a delight to watch this show.

+ 2
6 years ago Loving this show Fahad and Zalak rocks as Nikhil and Anmol!

6 years ago Don't know about the last comment. It's been a month and the TRPs are consistently at 0.2. But then again it's on Sony..so what more can we expect!