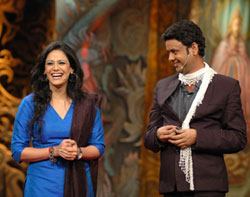 Mona Singh after winning Arre Deewano will now be seen in a new avtar on Sony's Comedy Circus - Chinchpokli to China.

She will be seen playing Shaani Shanno, a reporter on C-grade Secrets Channel who is out to cover a high-profile C-grade movie party which has the who's who of the movie industry… like, there is Shakti Kapoor, Feroze Khan, Subhash Ghai and last but definitely not the least Bobby Darling. Obviously these artists were not present themselves but, it was the stand-up comedian Rehman enacting them.

Catch this rendezvous between a C-grade journalist and some filmi sitaare only on Comedy Circus Chinchpokli to China on Saturday, March 14, 2009 at 9.30 pm exclusively on Sony Entertainment Television.

+ 2
13 years ago lolz cool! :D she was awsum w/ shakeel..n shakeel is an amazing comedian...so dis tym she will b even mre awsum..sounds HILLARIOUS!: D lolz
xoxo
sadi<3

13 years ago Wow, Mona was too good last time with Shakeel....I know she will bring the house down this time too!

+ 2
13 years ago Mona did a gr8 job when she performed wid Shakeel, m sure she will rock this tym too.
All the Best Mona.