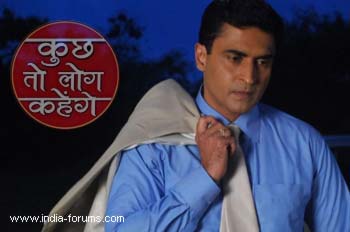 The hectic schedule of daily soaps seems to have taken a toll on Mohnish Bahl and the actor has decided to quit "Kuch Toh Log Kahenge" just months after it went on air.

"His doctors have advised him to rest and...to not work the kind of hours and days a daily soap requires. We, therefore, mutually agreed to part ways rather then let his health suffer," she added.

The show, which went on air in October last year, is an Indian adaptation of popular Pakistani TV series "Dhoop Kinare", which starred Rahat Kazmi and Marina Khan. It was a rage in both India and Pakistan during the 1980s.

The Indian version of the show stars Mohnish as Dr Ashutosh, while Kritika Kamra plays his love interest, Dr. Nidhi. According to a source, Mohnish's exit has been set around an accident sequence, which is said to be already shot.

Television actor Anuj Saxena, who rose to fame as Abhay Kapoor with Ekta Kapoor's "Kkusum", is most likely to replace him in the show.

mamtasa 7 years ago Mohnish Bahl you have left us heartbroken :((

ashutosh.panda 7 years ago Dr Ashutosh Rocks.MOHNISH is the best choice for this lead role.miss you.

Tears90 7 years ago Mohnish Behl is the perfect Dr. Ashutosh...miss him terribly... ;(

ritikakansal 8 years ago Pls sir come back...there is emptiness in ktlk without you...

mudraswathi 8 years ago Oh! such a loss! really!!! He had marvellous acting skills!!

mamtasa 8 years ago Want to see you back on screen soon !