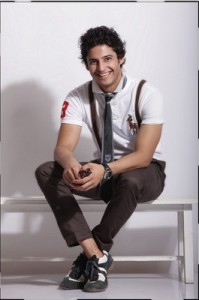 We have all seen the dashing Mohit Malhotra gulping away the yummy mango drink Mazaa in the commercial ad that is on air these days.. The actor in the past few months has become a brand name in South East Asia when it comes to the popularity of his ads.

A source tells us, "Ever since Mohit shot for the Mazaa ad in Malaysia, there has been no looking back for him. Soon after, he shot for a Pakistan telecommunication ad in Bangkok. The ad got so popular that he has been called to shoot for the same again".

In fact, when we tried to call Mohit yesterday, he was boarding his flight to Bangkok. An excited Mohit told us, "Ya, it feels happy to be called not once, not twice but thrice for popular international ads".

Mohit as we know will be playing brother of Sakshi Tanwar in Sony's upcoming show, Bade Acche Laggte Hai. His entry is slated to be aired in the 4th episode. His entry sequence is supposed to be an airport scene wherein he comes from abroad.

However when we tried to probe Mohit further on his role, he refused to divulge any information.

We wish Mohit all the very best for his ads and upcoming show..

Onupriya 9 years ago He is the brother of any actor. Who is his bro?@sohanid

peehu.vg 9 years ago india forums really has turned into a PR website ... is this news ... a guy doin ad for 3 brands ... really ... whatever ... first of all he was the worst actor in sasural genda phool and really he should learn to act first ... everything else will follow ...

kashforlifex 9 years ago He looks like Suresh Raina! hahha so similar!

Angry_Bird 9 years ago good for him...
All d best for new show

Inspector Sahib 11 years ago this is some good gossip! thanks for the article!