Finally, it is confirmed that COLORS' Mohe Rang De will be going off air, end of February or early March. 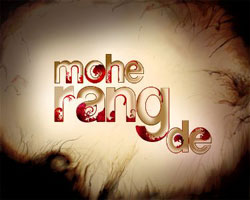 We had then spoken to Sphere Origin Producer, Sunjoy Wadhwa, who had said that the channel has not intimated him of anything like this.

But today, we got a confirmation from an actor who is part of Mohe Rang De, who on terms of anonymity said, "Yes, those were not just rumors, Mohe is ending probably in March. But we are yet to get an official confirmation on this, though the news is confirmed".

We tried calling Sunjoy Wadhwa again, but he was unavailable.

Well, this surely seems to be the end of the road for this periodic drama…

crazyneilviraj 13 years ago plz! dont end the show kranti n rajbir''s lovestory has not started yet we want to see their long love story

sivanisha 13 years ago It is really disappointing for me I love mrd very much. If show will be off i will not watch any programme of color

+ 5
13 years ago well its unfortunate that channel wont let a good show have proper wrap up i feel it needs atleast 6 mthd to justify the story line ,it has brilliant cast and such amazing stroy ,it will be end of colors for me if they decide to chop this one of best shows on television ,and on top its show which is having good trps...why cant rahe tera aashirwad end or they can change time slot r channel walas blind dont they know how sweet this show is..

13 years ago please dont do this to us...we all are emotionally attached to this show....change the time slot or anything but do not chop it like dis... pleeeeeeeeeeeaaaaaaaassssssse!!!!!!!!!!!!!!!!!

archika 13 years ago extremely disappointed,what the hell is going on??
how can they stop the show like this when so many idiotic shows are still there which are100times more deserving than MRD to go off air,need not to mention JS,bandhan saat... &etcetc..are they giving better TRP''s to channel,if yes then i really condemn!!
Go 2 hell everybody especially the channel!!!!!

13 years ago The Channel has been fooling around with this show for so long now.
If they cannot respect niche audience, its goodbye from us to the channel too.. they can take their ''socially relevant'' shows to whatever audience is keen to watch them.

+ 2
13 years ago Oh no....i love this show and this is the only show that i watch on COLORS...y do they hv to end this show? plz dont do this....its a lovely show...i wish the ceatives wud concentrate more on the romantic angle now

13 years ago please change the time slot but do not axe it down....we all love this show immensely!