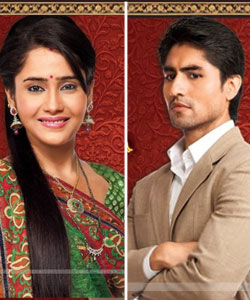 Imagine TV's Dharampatni is making waves due to the unusual relationship of Mohan (Harshad Chopra) and Kastur (Aasiya Kazi). Though Mohan is completely disinterested in Kastur, monetary crisis forces Mohan to marry Kastur.

A source from the sets spills the beans, "Mohan is trying very hard to get rid of his financial crisis for which he has been black mailed by a friend. Eventually, Mohan will agree to get engaged to Kastur as he thinks its the only solution to get out of his problem. In the coming episodes, there will be an engagement ceremony on the show which will initially create some tension but at the end, it will be all done nicely."

When prodded further, source said, "Kastur will doubt about Mohan's change of behaviour and his absence from the engagement ceremony which will put her and the audience in a huge dilemma. Soon Mohan will be revealed sitting with Kastur's grandmother (Gopi Desai) as he didn't get enough time to spend with her since the time she has come back."

The ceremony will have a happy ending with the whole family along with Mohan and Kastur shaking a leg.

We tried hard to contact Harshad Chopra but he remained unavailable.

Though the rituals went smoothly, a huge drama will unfold for the audience before their marriage.

“My role as Sharda stands out the most in my career for a special ...

-Smile- 9 years ago All the best. Keep smiling. God bless the team

Fatima_Q 9 years ago Looking forward to the next episode, and of course the wedding!

mary78613 9 years ago really looking forward to their wedding!!

may63 9 years ago Awesum show...cant wait to c the engagement followed by wedding...as usual harshad was dazzling in traditional attires...God bless him n the whole caste n crew of dharampatni...

silky_harshad 9 years ago Awesum show...cant wait to c the engagement followed by wedding...as usual harshad was dazzling in traditional attires...God bless him n the whole caste n crew of dharampatni...

Aditya Chopra Pens a Heartfelt Note on '50 years of Yash Raj ...
14 minutes ago

Never thought I would be dancing, I was preparing to be an ...
20 hours ago