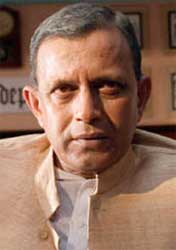 The evergreen Mithun Chakraborty seems to be growing younger and younger by the day! The cast and crew of Shree Ashtavinayak Cine Vision Ltd.'s "Luck" directed by Soham Shah, are sure going to agree on this!


Apparently one of the scenes required Mithunda to jump from a chopper, and that too mid-air!


The actor, without a second thought agreed on performing the daredevil stunt. However, while landing. Mithunda had a small slip and bruised himself badly.


The crew immediately rushed to him with first-aid and the doctor on set advised him to take rest! But the committed actor that he is, he insisted on shooting and completing the sequence!


The cast and crew of "Luck" couldn't stop singing praises of Mithunda's professionalism!


Nothing beats the actor!
Featured Video