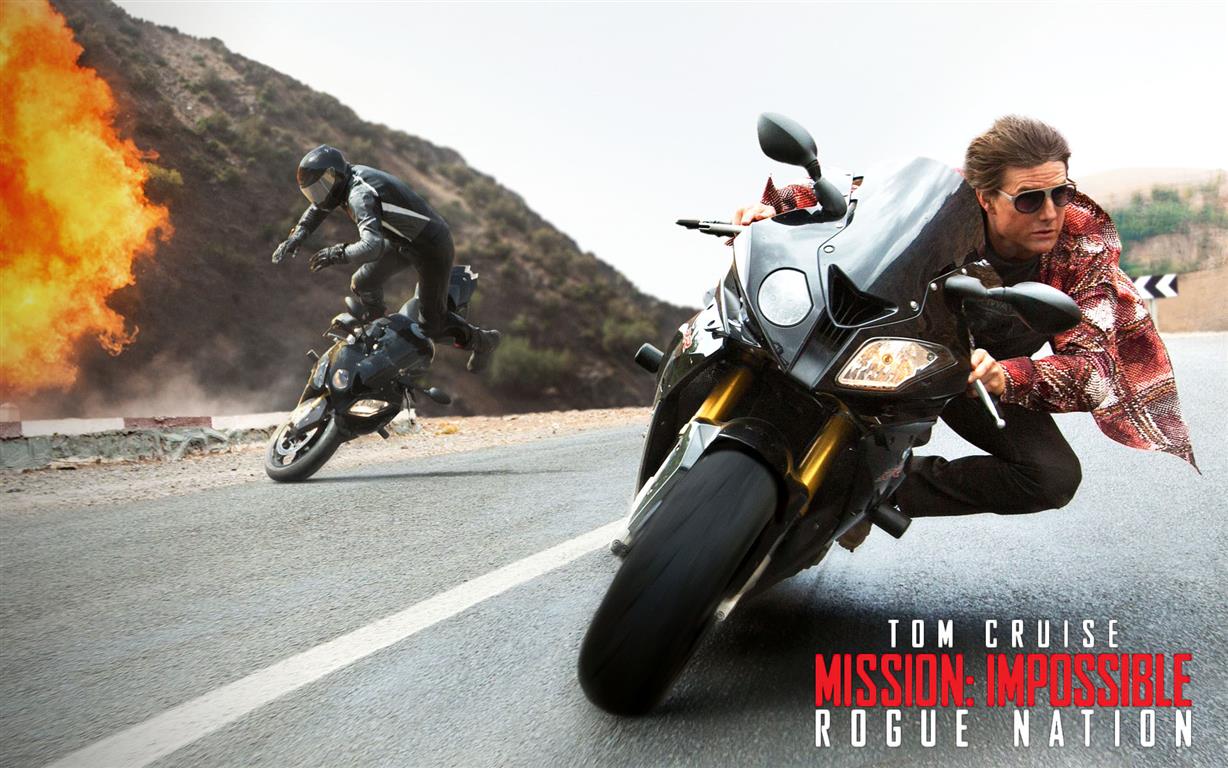 Based on the American TV serial of the same name, "Mission: Impossible - Rogue Nation" is the latest in the franchise that started off in 1996.

The opening sequence of this film which introduces Ethan Hunt (Tom Cruise) sprinting, jumping on a moving aircraft, dangling on the aircraft door and then parachuting out of the plane, has been on every poster and trailer of the film. This seems like the director's desperate measure to entice the audience.

This adrenaline rushing stunt has no connection with the narration that follows. Nevertheless, the film with a vanilla plot is straightforward and glossy enough for a one-time viewing. It is packed with lethargic, repetitive tropes of a quintessential, formulaic spy franchise, five films deep.

Soon after this first sequence, we are given to understand, that the Impossible Mission Force (IMF), is now dismantled and off the block, by CIA Chief Alan Hunley (Alec Baldwin). For some inexplicable reasons, Hunt who is absconding, refuses to comply with the CIA.

So like in the previous edition, Hunt goes out of his way, without the US government's backing, to catch a "nefarious terrorist" Solomon Lane (Sean Harris). He is the head and creator of a secret terror organization called the Syndicate. Hunt does so by bringing together his ace team, which includes, Benji Bunn (Simon Pegg), William Brandt (Jeremy Renner) and Luther Stickell (Ving Rhames).

In this endeavour, he is helped by British intelligence agent Ilsa Faust (Rebecca Ferguson), who crosses and double crosses him time and again. While the story focuses on Ethan Hunt and his mission, it gives equal footage to Ilsa Faust. Her actions make the narration intriguing.

The story is generic and the screenplay by director Christopher McQuarrie meanders with fine, action-packed sequences that do not leave you with a lasting impression.

While the plane stunt, the car and motorcycle chase and the underwater stunt are breathtaking, there is no moment that is jaw-dropping or spirit-elevating. These awesome set pieces are predictably enjoyable and the tale is a bit tedious and ordinary which traverses at a comfortably rapid pace.

But what keeps you hooked is Tom Cruise. At 53, the star is as agile as he was 19 years ago in the first "Mission Impossible". His character, as in the previous edition, is drawn larger than life and here it is even spelt out with Hunley admitting, "Hunt is the living manifestation of destiny". Unfortunately, this does not come across onscreen as he is always rescued at the last moment and that takes away the heroic glory from him.

Rebecca Fergusson matches Cruise with her smooth swift moves and sharp reflexes. For a newcomer, she is pretty competitive. Baldwin staggers between comic and dramatic expressions, Pegg is likeable and funny as always, playing the bumbling technician. The terrified look in his eyes when he is strapped with explosives is palpable and Sean Harris, as the elusive Solomon Lane, with his hoarse voice, does a great villain caricature as he dodges Hunt's every move.

The visuals are vibrant and the locales - London, Casablanca and the Opera at Vienna - are well captured by Robert Elswit's cinematography. With razor sharp edits, these visuals are layered by Joe Kraemer's brilliant, virtually non-stop background score making the entire viewing experience acceptable.

This "Mission Impossible" will appeal to Tom Cruise fans.