Do you all know the similarity between apples and oranges… sometime also known as easy peelers tangerines or mandarins? Of course, you would say, they are fruits silly! So inspite of being so different, they are still so same. They are like stars of Big and Small screen who too are a part of a Large family. Their screen is different , their way to reach their audiences is different, but they all do same thing “Act, perform, entertain and Strive for Stardom”. Some have it inborn, others works it out. We picked out a select few who mirror each other on screen, often prompting us to think...'Oh! So like him!!' Lets see which stars share their style of working with our Big screen idols and who themselves are in making of Big Stars of Future. 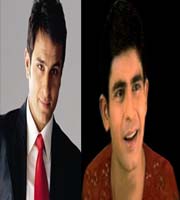 Saif Ali khan--Hussain Kuwajerwala—
Similarities between Saif Ali Khan and Hussain are plenty. The way they have progressed in their respective careers is phenomenal, they both have grown into youth icons, have a metro sexual appeal, great dressing sense and both of them are not afraid of experimenting. They both have done all sorts of roles, experimenting with a wide range of performances in their career from hosting to dancing to acting! They both have good physique, trendy hairstyles and CHARM! They truly are actors to watch out for as their best is yet to come !

Both are great dancers and and look like milllion bucks. They carry a certain attitude, charisma and aura around them. Both are extremely picky about the subject they work on. Hrithik does one film per year yet girls swoon over him , same with Ejaz - his last show as a lead was over a year, did a cameo in Kayamath but people still are fida over him. In a world where people have a very short memory , its commendable to remain in people's hearts .

The reigning king of Bollywood is Shah Rukh Khan and Rajeev Khandelwal rules Tellywood. Both work on their own terms, and are not afraid to choose the unconventional paths to achieve what they want. Both have dealt with many controversies and negative publicity, yet that hardly could put even a dent in their image. SRK was almost written off as a one film wonder with little potential as he could hardly act, yet the Badshah proved them wrong, again and again and again. Here, Rajeev took the risk of his lifetime by going against the reigning Queen of television, Ekta, and yet emerged victorious. He is the only Sujal people ever loved , no matter how much Ekta proclaimed otherwise. He is god’s own child just like SRK, they both know how to use media and be in limelight even without doing any shows or stage performances.

Like the King Khan, Rajeev is always accessible to his fans, giving him an extra edge over contemporaries. Now with Rajeev signing a movie, have we finally got another Shah Rukh? Well, whether we have another SRK in the making or whether he is going to make his own niche is something we all are eagerly looking forward to and speculate!

Both are Librans , born on the same date and are ruling the big and small screen respectively. Yes that’s Ronit Roy and Amitbah Bachchan for you, they are living legends and source of inspirations for their peers and new actors. Both were rejected in the early stages of their career......though as a slight difference, Amtabh rose to become the undisputed Shahanshah of big screen, while Ronit had to struggle a little longer to get his dues. But as far as getting out of lean patches and rising like a phoenix, there is no match to these two. Charismatic and sexy irrespective of their age, they both have tasted failure and have risen from dust. There was a lean period in Big B’s life when he was facing huge financial problems while Ronit had become an alcoholic and had almost given up on his acting career..and sudden turns of event had Amitabh Bachachn getting KBC and Ronit Kasauti Zindagi ki and the rest,as they say, is History.

That flamboyance and deadly looks sets them apart from rest. They will never lack female attention and admiration in their life, even when they are 80 years old grand old men with grand children . They both are stunner on stage and have great comic timing. Both live life king size and work on their owm terms and conditions , and never shy away from refusing roles left right and centre! Yet they are king of their own World and no one complains!!! That’s the kind of aura and personality they have..kuddos to both of them.

Be it looks, sex appeal, charm or humbleness - John Abraham has it all! And our radar picked up Anand Suryavanshi as his counterpart who has it all as well! They both are tall, have a great body, have plenty of attitude and yet are so very humble. Both are surounded by the Khans, the Bachchans, the Kapoors or the Tejwanis who rule the roost respectively in both the industry, yet they stand tall among them and have never been overshadowed by anyone. They belive in themselves and on their talent!! way to go..both of you. And sky is the Limit!

Very subtle, humble and great actors, they believe in doing things differently. If the world goes on one side, you will find them standing on the other with smile on their face.With their conviction and great acting they proved them selves every single time . If Amir has an off beat Lagaan to boast of, then Varun has the very different Astitva to his credit, essaying a bold role with ease and aplomb. Both have refused to be tied down to any one production house. With their all-round performance,they have both time and again showed the world that if you have courage and self-confidence you need no camps or tents to achieve success. They both believe in the mantra of 'pave your own way'. Still actors of such calibre deserve more.... don’t you all think the same!!!

Both can be named as 'Attitude Khan'. If there is one big thing in common between them other than the surname and a massive female addulation, then it's the attitude. Both have the tough man with a soft hear image, are very close to their family, and can go to great extent to be with the ones they love.

Both Abhishek and Pulkit Samrat are good looking and have a boy next door charm. Having an uphil task of proving himself in face of his legendary father Amitabh, Abhishek went on to prove his mettle as an actor with a series of hits and a performance like Guru. Today people know him because he is Guru. On the same lines, Pulkit too had an uphil task of making his mark on a show which is practically a galaxy of stars, right from Tulsi to Mihir to Karan to nandini. Pulkit not only stood apart and carved out a neat niche, he went onto to become a raging heart throb. Standing apart in an elite star cast and grabbing eyeballs in such a show is a no mean feat. And the game has just began for both.

Their very look is same. Their hairstyles and stubbles makes them look like long lost brothers. They always got roles which have grey shade in them and yet managed to walk away with all the glory and female fan following inspite of all the negativity in the their onscreen persona! For some, they always will be the Hero no matter how dark their character is! Who cares actually when you have Mr. Bhatt and Ekta by you side!

Phenominal actors with great looks, both have had similar start to their careers. While Shiney started his career with offbeat movies like Hazaar khwaishiyan aise and made his mark followed by many award winning performances, Jatin Shah also started as second lead and did a cameo in Kasauti and in Kasturi .All this could not deter them from their way to success, and instead it proved to be a blessing in disguise for them, as people never expected anything from them, and they got plenty in return. They have performed even in the minuscule of roles and are now currently few of the most sought after actors of big and small screen respectively.
This was our take on star and stardom .We have spotted some diamonds from the Telly world who could become the Star of 70mm screen, as they have everything..from talent to spark to personality. As someone said “The things that happen are the ones that you really Believe in and the belief in the thing that makes it happen!"

+ 4
11 years ago For Some reason Pulkit does not look like Abhishek at all. I feel you look more like Imran Khan or Amir Khan.. Lol

14 years ago Why does everybody exclude Rajat from most of the articles? =(

glooms 14 years ago jatin shah and shiny not at all look similar.i luv jatin shah but i didn't like shiny at all.

+ 2
14 years ago I couldn't see any similarity between any of the actors!

14 years ago i also thought ekta said IQBAL KHAN was the SRK on the small screen
oh well Salmans good tooo
BAD BOY IMG..LOL
thanks for the article

14 years ago Please don't make Ronit Roy the mirror image of Big B. And ofcourse Ronit Roy is not a legend by any means.

14 years ago I thought ekta said Iqbal Khan is the Srk of small screen on coffee with karan!