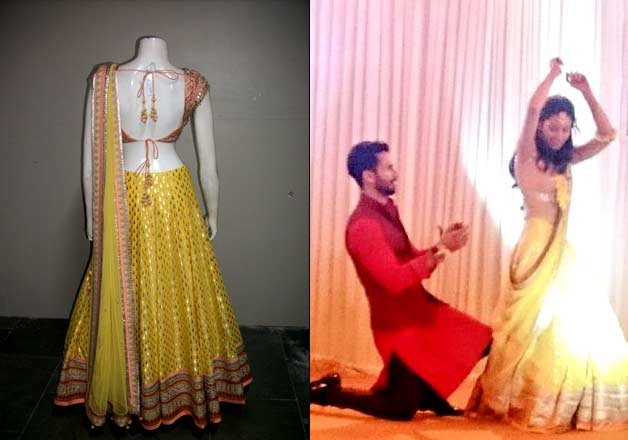 Fashion designer Anita Dongre says she created a yellow and peach ethnic ensemble for actor Shahid Kapoor's bride-to-be Mira Rajput for their sangeet ceremony, and it complemented her young and colorful personality.

"Mira opted for a customized beautiful yellow lehenga and paired it with a lovely peach choli. The outfit Mira chose perfectly complements her young and colorful personality," the designer said in a statement.

"I always believe in creating ensembles for a bride that are lightweight and versatile so she can dance and rejoice at her own wedding. And here she is, dancing the night away at her Mehendi," Dongre added.

A photograph featuring Shahid dancing away with Mira at their sangeet ceremony on Monday night surfaced online.

Even Shahid looked suave in a deep red kurta, a bandhgala and black pyjama. An image shared by celebrity photographer Rohan Shreshta on Twitter shows Shahid on one knee while his fiance dances away looking resplendent in Dongre's creation.

Mira is a graduate from University of Delhi's Lady Shri Ram College, while Shahid, son of Pankaj Kapur and his now estranged wife Neelima Azim, has regaled Bollywood fans with movies like "Jab We Met", "Kaminey" and "Haider".

The duo was introduced to each other via their connect with the religious group Radha Soami Satsang Beas.

As many as 50 rooms are blocked in Trident, Gurgaon, for the family and guests, and the Presidential Suite of The Oberoi, Gurgaon, is occupied by Shahid himself. For a post wedding function on Tuesday night, the Grand Ballroom of The Oberoi has been booked.

Shahid, who made his film debut with a leading role in the 2003 released film romantic comedy "Ishq Vishk", was appreciated for his roles in "Jab We Met" and "Kaminey". His last released film "Haider", a Kashmir-set modern adaptation of Shakespeare's "Hamlet", won five honors at 62nd National Film Awards.

You can buy this lehenga from Ninecolours.com!