New Delhi, June 12 (IANS) Supermodel Milind Soman may be sporting a greying beard, but his fit physique defies his age. And the 43-year-old actor says he wouldn't mind doing 'Captain Vyom', the science fiction serial, all over again.

'Captain Vyom! Captain Vyom!' is how one of Milind's fans referred to him at an event here just two weeks ago, and the latter responded with a smile.

After becoming an established name in the modelling industry and featuring in 'A Mouthful of Sky', Milind became a household name for playing the protagonist in the futuristic sci-fi serial 'Captain Vyom' that was aired on Doordarshan in 2000.

So, if given a chance, would he like to play the character once again?

'Only if there is an interesting story that is offered to me would I do television. Maybe something like 'Captain Vyom'. I would agree to do a second season for it, feature in a game or even a movie based on it,' Milind told IANS.

Milind feels ecstatic every time someone addresses him as a super model.

'It's so wonderful! People still call me a supermodel even when I am 43 y 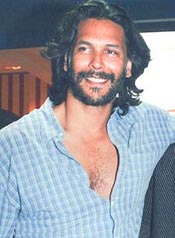 But till date he has maintained his good looks and well-built body that made him the most wanted model for advertisements and the ramp alike.

'I don't go to the gym very often. But I am used to swimming and running a lot. I go for marathons often,' said the actor, who was a national level swimmer and an electrical engineer prior to modelling.

He is now busy doing two Bollywood films apart from one in Telugu and another in Marathi. His Marathi venture, expected to release in July, is titled 'Gandh' (smell), but he refused to divulge details of his Bollywood project.

'I am really excited about my Marathi film. I am playing a very different character and I am happy that I am able to promote regional cinema,' he said.

Acting apart, Milind has his hands full on the production front as well.

'We have three films in their pre-production stage right now. We are doing a lot of shows and events,' he said while speaking about his production house Maximus Events.