Star One's Miley Jab Hum Tum, produced by Sunshine Productions and Endemol will be going in for a major revamp with some fresh new characters entering the show. The show will have a new set of students, and along with it the old popular faces will be seen in a new avatar. 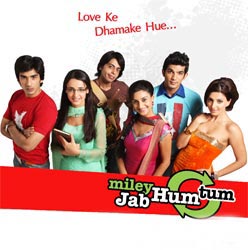 The show will also complete a milestone of 400 episodes on May 26th, and the big makeover has been planned to kick start around this time!!

According to our source, "Rapid changes in story line will be aired from May 24th to May 31st, and in the first week of June, a leap will be shown with which the story line will go ahead in time, by three years. This will be called the Season 2 of Miley Jab Hum Tum".

However, very popular characters of Season One, Uday, Benji and Dia played by Jas Karan Singh, Abhishek Sharma and Naveena Bole will not be part of Season 2.

As per our source, "The trio have been informed that they will no longer be part of the show. They will be shooting for the show for another one week or so".

Jas Karan Singh confirmed the news and said, "Yes, Uday will not be seen in Season 2".

Naveena Bole too confirmed that she will not be part of the show. Abhishek Sharma was unavailable for comments.

A little birdie from the sets tells us, "The makeover will also be in terms of the sets. A new set is being erected for the Season 2. The old actors will be seen in new avatars, and their costume would also see a sea-change".

When contacted, Producer Sudhir Sharma confirmed the revamp and said, "Yes, Miley Jab Hum Tum is going for a major revamp. Few new characters will be introduced. We will see fresh and exciting story lines, and the viewers will surely not be disappointed".

As per our source, "None of the new characters have been finalized, and auditions for the same are going on. But the biggest shocker for the audience will be that, one amongst the four principal characters, Mayank (Arjun Bijlani), Nupur (Rati Pandey), Samrat (Mohit Sehgal) and Gunjan (Sanaya Irani) will be shown as dead at the end of Season One. And this will change the lives of the other three forever. However, the character who will be killed has not been decided yet".

hamsalhaneen 4 years ago Sanaya Irani missing u like crazy