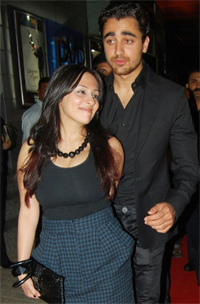 There had been buzz about Imran Khan's wedding plans with fiancee Avantika Malik in December of 2010, earlier this year. Sources now claim that the month for the wedlock shall in fact be January, 2011. Reason for postponement? Blame it on Imran's philosophy of January being lucky for him, having gotten engaged to his long time girlfriend in the same month this year!

And that is only the beginning to Imran's planning streak for his much awaited D-Day! The wedding, which is expected to be neither a nikah, nor a Hindu ceremony, shall instead be a simple registered marriage. The arrangements for this not so lavish plan are still many and elaborate. While the guest list will be much more restricted as compared to the engagement ceremony, Imran is putting in his entire mind to carving a wedding day he can cherish all of his years to come thereafter!

In a media tabloid, the actor was heard to explain that a precise date had not been fixed cause there was still some sorting to do with his shooting schedules. But that he was vying to plan a date such that there would be unrestricted time for him to take a break, indulge in the ceremonies meager though they may be and celebrate his special occasion to the fullest!

Well, Avantika sure can sit back, and be relaxed about her groom-to-be! For here is a guy who leaves no stone unturned, to make special memories with his ladylove!

Our love and luck to Imran, Avantika!