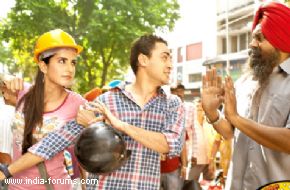 Somewhere in the vast spaces of mainstream Hindi cinema, the North Indian shaadi with its band baaja and, yes, baarati, seems to have made a permanent place in our cinema. 'Mere Brother Ki Dulhan' (MBKD) is the third film in the last 8 months after the delightful 'Band Baaja Baarat' and the surprising 'Tanu Weds Manu' to weave a rom-com around the sights, sounds, scents, stress, chaos and satire of a big fat Hindu wedding.

Must say, the other two films got it right dead-on. MBKD flounders in its frisky fusion of a love triangle and plea for an arranged marriage. Debutant director Ali Abbas Zafar knows the subtexts in his script well enough to conceal the rather glaring discrepancies in the storytelling.

The narration quite frequently relies on jump cuts, retro music and other external ploys to make the goings-on appear more involving than they really are. The recurrent use of R.D. Burman's 'Piya to ab to aaja' has no relevance after a point. It just becomes a tiresome inclusion.

The three main characters, played by three watchable stars one of them from across the border, manage to take the plot's improbabilities into the province of the palatable. But the situational humour doesn't quite have the delightfully disarming naturalness of 'Band Baaja Baraat'.

But the characters exude a contagious warmth, more in their individual capacity than in combinations. For a film about love warmth togetherness and family bonding during the time of a wedding, the interactive warmth between characters is strangely missing. Besides one memorable sequence towards the beginning in front of the Taj Mahal (a recurring cultural and sociological symbol in the film) when they share cold chai, there is little to suggest any serious bonding between Katrina Kaif and Imran Khan...or for that matter, between the two brothers played by Ali Zafar and Imran Khan.

Zafar who delighted in the satirical mode of 'Tere Bin Laden', returns with yet another performance that knows how over-the-top to go without toppling over. Yup, Zafar gets it pitch-perfect all the way. The same cannot be said of the film which occasionally slips into becoming a stretch.

What really redeems the film's blind spots is Katrina Kaif who brings a very special transparency and dazzle to her role of a wild child who wants to have all the fun that she can before she settles into a comfortably arranged marriage with the rakish NRI Ali Zafar.

Fun, as it turns out, leading to falling in love with her brother-in-law-to-be. The turn of events may surprise the characters. We remain largely detached from the synthesis of celebration and drama.

'What will I tell everyone? That I fell in love with my Bhabhi?' the embarrassed and horrified brother-in-law tells his untamable babhi-to-be.

That's Imran Khan, playing the sweet-tempered benign do-gooder once again. Khan stays in his comfort zone while Katrina comes out of it to give herself and the audience the time of her life. 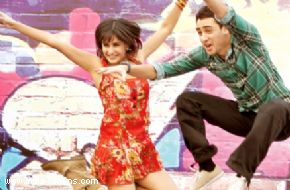 There is nothing seriously amiss in MBKD. It gets right the camerawork (Sudeep Chatterjee), music (Sohail Sen) and the outdoor locations in and around Delhi. What it misses out on is that element of unpredictability during the time of a wedding that 'Band Baaja Baarat' and 'Tanu Weds Manu' managed to capture probably because the couple at the helm was supported by any number of splendid supporting stars.

Here the supporting actors are serviceable. Parikshat Sahnni and Kanwaljeet as the couple's fathers try to be comic and filmy. They just looked jaded.

By the time the Brother walks away with the Dulhan we really have nothing we would like to say to them, except, what took them so long?