Megha Gupta will be seen in a special appearance in Endemol and Fourline Productions' Geet, which is to launch on Star One. 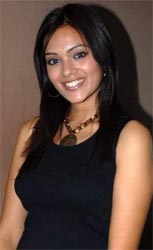 Megha will be seen establishing the story line to the viewers in the first episode. This special sequence was shot at Wahi, in the 'Magic Hour' which is the brief period that comes after the night is over and just before the sun rise. Likewise, the Magic Hour is also seen soon after sun set and just before the night sets in.

Speaking about it in a photographic sense, the Magic Hour is the first and last hour of sunlight during the day, when a specific photographic effect is achieved with the quality of the light.

According to our source, "The first episode of the show will have this splendidly shot sequence. The shoot went on at Wahi for two days, and the scene had Megha Gupta establishing the main plot of the show. The entire unit would start their day pretty early and making sure that there is no technical snag, would wait for the Magic Hour, which lasted for just 10-15 minutes. After their shoot for this brief period, they would pack up and again wait for the evening session wherein they could shoot for another 10-15 minutes".

"The scenes have come out very well and are a treat to the eyes, as they have been shot under the complete golden effect", informs our source.

When asked, Megha Gupta told us, "Yes, we did shoot in the magical hours at Wahi. The shooting experience was fantastic. But I cannot talk on the story plot".

The show has Gurmeet Chaudhary and Drashti Dhami as leads. Abhinav Shukla plays a negative role in the show. Geet is expected to launch sometime in April at a prime time slot.

+ 4
9 years ago GC and DD you both were awesome today as usual...MAANEET moments were so emotional and beautiful...

+ 3
9 years ago Drashti and Gurmeet you both are amazing and we,love you very much