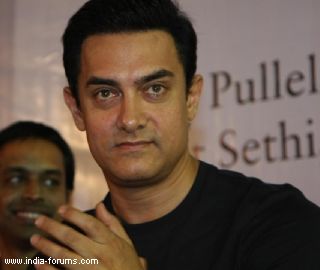 "Satyamev Jayate" is Aamir Khan's first television project and the star says that the reality show will create history by becoming the first ever programme to go live simultaneously on a private channel and national broadcaster DD1.

"This is for the first time in the Indian history that a show will also be showcased simultaneously on national television channel DD1. Besides, the show will be dubbed in four southern languages - Telugu, Tamil, Malayalam and Kannada. This show is being launched on a large scale," Aamir told reporters Friday here at the launch of the show's promo song.

"Satyamev Jayate" will go on air on Star Plus May 6.

"I don't understand TRPs (Television Rating Points) and GRPs (Gross Rating Points). I have no idea how to calculate it! I don't care about TRPs. It is important to reach out to the Indian audiences. If viewers want to see, they will see or else it is up to them," added the 47-year-old.

Aamir feels that TV is a very powerful medium and added: "I had to make complete use of this medium. This is a baby step towards it."

"I cannot say I understand TV completely. I was earlier scared to go ahead with the project. I can only say I have made this show with complete honesty and without compromising on anything."

The promo song of "Satyameva Jayate" is a love song.

"Earlier, we were planning to compose a national song or like one anthem. Later, I realised, why am I doing this show? I have love in my heart for my country, like each Indian who love their country. Then we went with a romantic song. We thought, it should be a love song that reflects the love for my country and relate with each Indian," he said.

Composed by Ram Sampath and written by Prasoon Joshi, the song is sung by Keerthi Sagathia.

The show has got the famous "Ramayana" and "Mahabharta" slot - Sunday 11 a.m.

"I wanted to telecast my show on Sunday morning. I want each family to watch the show and connect with it. We have watched 'Ramayana' and 'Mahabarata' and it used to come on Sunday morning. The shows created a different atmosphere. I am not scared of the saas or bahus. My thought was 'Bharat jodo abhiyaan'."

The actor spoke about everything, except the concept of the show and said: "I can't talk much about the show."

rpuran 8 years ago hmm may b it would b a new show.. but no one felt that the promos are a little over the top, n he seems too full of himself? i like aamir khan, but the promos are OTT

0-SD-0 8 years ago Wow!!!
"This is for the first time in the Indian history that a show will also be showcased simultaneously on national television channel DD1. Besides, the show will be dubbed in four southern languages - Telugu, Tamil, Malayalam and Kannada. This show is being launched on a large scale," Aamir told reporters Friday here at the launch of the show's promo song.
"Satyamev Jayate" will go on air on Star Plus May 6.

nehnehneji 8 years ago Can't wait, will definitely be tuned in! Theme song is simply fantastic :)

marauder 8 years ago now waiting for this first pan india show. can again look forward to watch something which matters

Sunna_Deewani 8 years ago Wow! The show will come on DD too. I too don't understand TRP thing. If it comes on DD, how will starplus get more TRPS. Thats not my concern anyway.

I'm not too much into reality shows, but since Aamir is doing it, i will definitely give it a try.

croziaxx 8 years ago All the best to you Aamir, and I hope 'show' will be a big hit, if it will true, some more people would try to do something 'better' for TV, because tv has nothing left to watchable now..

P.Srinivas 8 years ago Aamir you are the best.True superstar &Great actor.Cannot wait your show t be aired.

KiranSonu1 8 years ago Eagerly waiting for Aamir's show...Luv u Aamir.