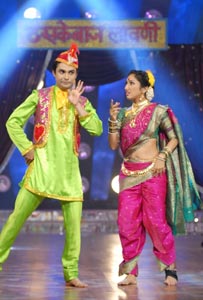 Jodi No.8 Mazher and Mouli Ganguly are having a real good time in Nach Baliye so far. After getting the trade mark ‘3 claps’ from the Karisma for two consecutive weeks, the jodi carried forward their good performance this week too, thus achieving a hatrick of claps from Karisma.

This week's theme for Nach Baliye was on ‘Stage Performance’.

According to our source from the set “ Mazher and Mouli did a Lavni act (Maharashtrian folk dance) wherein Mouli was the typical Maharashtrian girl, while Mazher was dressed up as Ustaad, the gay character. He was so much into his character that he had fultoo time pass while eyeing Arjun even as he performed.”

“They performed very well and got good comments from the judges. But at end of it, Arjun was an embarrassed man as Mazher was all over him, and even ended up kissing him after the performance”, add source.

Sunil Shetty and Malaika Arora Khan were the special guests for the episode and had come to promote their film EMI which is soon to release. Seeing the gesture of Mazher towards Arjun, Sunil Shetty commented, "This is Mazher's genuine feeling for Arjun. He also asked Mouli whether she is getting insecure,” says our source.

We spoke to Mazher who said, “It is very difficult for me to explain what I did and how I performed as a eunuch. It was so tough to get into that character. All said and done, I will never opt to play such a character again (laugh).”

We look forward to the majedaar advances of Mazher this week!  Author and Reporter: Srividya Rajesh
Featured Video

14 years ago thanks.... best of luck to them, they look like the underdogs of competition!