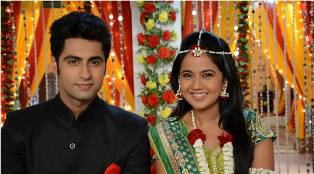 Shakuntalam Telefilms' popular show Sapne Suhane Ladakpan Ke is incessantly grabbing viewers' eyeballs by its interesting sequences in the episodes. And this time the viewers will get to watch something new which will keep them glued to their television screens.

Now in the upcoming track of the show Ankit Gera who plays Mayank takes up Baba's avatar as he religiously and blindly follows his spirituality.

Our sources say, "Soon the audiences will get to see some interesting drama in the show. A Baba will enter the show and Mayank is totally in awe of that Baba. Baba tells him that Raaj Yog will soon begin and he will have good days coming in his life again. But, Gunjan aka Roopal Tyagi acts all investigative regarding this Baba. She tries hard to bring out the real face of Baba in front of everyone. During this, an argument erupts between the Baba and Gunjan. Mayank is a very Mamma's boy and his mother too believes the Baba, so he trusts the Baba blindly.

When contacted Ankit, he said, "Well, in the show I had taken up the avatar of the baba but I do not think I will dress up like a baba during the show."

Well, the track seems extremely hilarious. But how well will it work on audiences is something that only time can decide.

marty999 6 years ago Roopal Tyagi you are the best I love your pair with Ankit Gera as Mayan too.

PROTIM21 6 years ago Roopal Tyagi, you have very beautiful smile.. Love you as Gunjan & Roopal..

milla 6 years ago Roopal Tyagi love you and Ankit Gera love you too as Mayan you both rocks. SSLK Rocks.

marty999 6 years ago Ankit Gera and Roopal Tyagi is the only reason I love this show. They will rock this track. I love SSLK

PROTIM21 6 years ago Roopal Tyagi, you are looking very beautiful in the pic.. Love you..

milla 6 years ago So happy to see a Mayan track. Roopal Tyagi and Ankit Gera rocks as Mayan. Love SSLK

milla 6 years ago Wow a Mayan track about time. Love Roopal Tyagi and Ankit Gera so much. SSLK ROCKS