However, the interesting situation has been deterred now, working out in Devgn's favor with Shahid-Sonam starrer 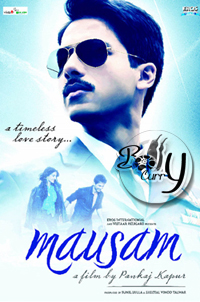 Mausam deciding to take a step back and push it's release date to September 9th.
Why the retreat, you ask?

Pankaj Kapur, who makes a debut in direction with this venture, wants some extra time so that he can work on the post-production of the film - read film promotions. And one can't but wonder if over a year of making headlines for all the odd reasons, good and bad, not to mention the stellar lead pair cast, haven't been reason enough already! In any case, Pankaj Kapur stresses that the film has shaped up well, and he does not wish to rush and blunder. He also trashes all alleged rumours of the competition between Singham and Mausam having anything to do with the date shift.
Currently emphasizing instead on the technicalities, Kapurs are focusing on the theatrical trailer of Mausam which is expected to show a range of nuances of the storyline and its leads, within a span of two minutes. Proposed to be released on June 24th (alongside Double Dhamaal), this first trailer promises to raise the anticipation of the actual film release by several notches.  The second trailer shall be seen on July 15th alongwith Zindagi Na Melegi Dobara.

Will the shift of seasons work winds in favor of Mausam?!

Rhea Chakraborty did not name any Bollywood actors during ...
19 minutes ago