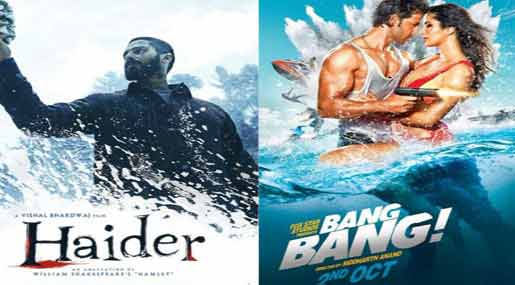 Despite being tagged as "mindless", "loud", "dumb", "pointless" and "exhausting", action thriller "Bang Bang!" has minted Rs.27.54 crore on the first day. "Haider" - a well-appreciated and a comparatively small film - released on the same day and has got its share of audience too. It has raked in Rs.6.14 crore.

"Bang Bang!", reportedly made at a budget of Rs.180 crore, and Rs.24 crore film "Haider", which is Vishal Bhardwaj's adaptation of William Shakespeare's "Hamlet", came Thursday.

Directed by Siddharth Anand, "Bang Bang!" stars Hrithik Roshan and Katrina Kaif. In addition to star power, it has ingredients like love story, amazing stunts and peppy music and has captured the scenic beauty of exotic locations like Prague, Greece and London.

With Shahid Kapoor and Shraddha Kapoor as the lead actors, "Haider" has a completely different look. Set against the unrest in the Kashmir Valley, the story revolves around a man who wants to avenge his father's death.

"Bang Bang!" opened across the country at 90 percent occupancy and continued its run at the counters through the day, said a statement.

"Haider" is getting rave reviews by critics worldwide and audience word of mouth is excellent! "Haider" has performed extremely well in metros and specifically in Mumbai, Pune, Delhi/NCR, Bangalore, Hyderabad, said a statement.