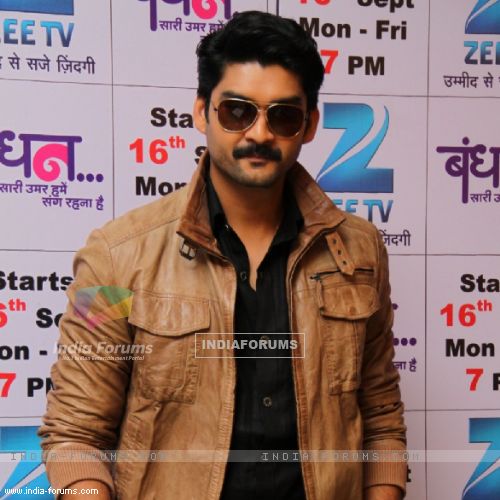 Actor Aditya Redij, who got married to his "Na Aana Is Desh Laado" co-star Natasha Sharma earlier this year, is enjoying marital bliss.

"After our marriage, I started shooting for 'Bandhan...' for which I had to shoot outside Mumbai for three-four days. But Natasha handled it pretty well," he said praising his wife.

When asked about them working together again, he said: "Natasha says that she will work with me only. I just hope the wishes of our fans, who want to see us together, come true."

The actor made a transition from modelling to acting and says that his journey has been comfortable so far.

"I would not describe my journey from being a model to an actor as a struggling type. When I started modelling, within two years, I was chosen for Dubai Fashion Week and I was the only Indian to walk the ramp at the event."

His desire to try something different inspired him to quit modelling, which was "all about walking on the ramp with a straight face".

"Hence, I auditioned for three shows, including 'Na Aana Is Desh Laado' and got through all of them. I opted for 'Na Aana Is Des Laado' as it was with Colors channel," he added.

As far as big screen opportunities are concerned, Aditya is taking it easy and said he would love to venture into mainstream cinema, "but he is not pushing anything and will take it as it comes."

He won't mind being a part of women centric movies like "Queen", which featured Kangana Ranaut as the protagonist and it was a big hit.

"Although I have not seen 'Queen', I heard the role of the male protagonist (played by Rajkummar Rao) was essayed pretty well. I don't mind doing such roles. I love to do things that excite me," he added.

After playing a modern guy in '...Laado' and a rustic character in "Junoon - Aisi Nafrat Toh Kaisa Ishq", Aditya will be seen as a Maharashtrian forest ranger in his new TV show "Bandhan Saari Umar Humein Sang Rehna Hai".

He is sporting a mustache in "Bandhan..." and says he doesn't mind growing a beard or shaving his head to make his characters believable.

"I put in a lot of effort while preparing for a role and I will go in for any look as demanded by the character," said the actor, who is also keen on being a part of a reality show, but could not accept an offer due to prior commitments.

minzuuuu 6 years ago love u Aditya Redij promo super & ur looks super now only 5 days then Bandhan aditya u rocks love u.

CHAVI5050 6 years ago I love u Aditya Redij waiting for Bandhan i love u.
this is for u jaan i love u.

Krilovad 6 years ago Love u dear Aditya Redij now count dw start for bandhan U rocks in all Promo love u dear muhaaa...

u Rocks all promo...sweet heart waiting for rocking Forester Ranger n his Bandhan lots of LOVE