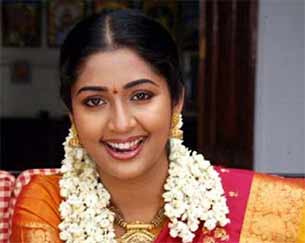 Actress Navya Nair, who was last seen in 2012 Malayalam film "Scene Onnu Nammude Veedu", has returned to face the arc lights in forthcoming Kannada film "Drishya". She says marriage and motherhood kept her away from films for a while.

"Ever since I got married, my acting career has taken a backseat. I have been busy with my three-year old kid and life has been wonderful. I had no intention of returning to films but when I was offered 'Drishya', I felt it was a good project to be associated with," Navya told IANS.

Navya, who is paired with Ravichandran in the movie, says she didn't mind playing the mother to a 13-year old.

"Even my director felt I was too young to play the mother, but I didn't have any problem because the story demanded it. I quite enjoyed playing the role and was not apprehensive about how audiences will react to it," she added.

Navya got married to Mumbai-based businessman Santosh Menon in 2010.