Zee TV's 12/24 Karol Bagh, produced by Sunshine Productions will see the entry of a guy in the life of Neetu Sethi, played by Sargun Mehta.

According to our source, "A relatively new face to television, Manit Joura will play the love interest of Neetu in the show". 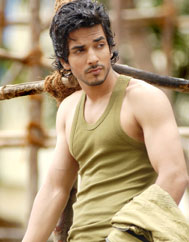 Featured Video
Manit Joura was earlier seen on television in the Star Plus reality show, Aaja Mahi Vay where he partnered Manika Dandha. The guy later took part in the Gladrags Megamodel Manhunt 2008. He has been the Brand Ambassador for Brunch Magazine for four years now. Manit has been walking the ramps, and has been seen in various fashion shows. He was part of the 'Ungli Uthao Vote Karo' campaign where he was seen along with John Abraham. He has recently shot for Godrej Hair Color ad which will be on air in the next few weeks.

According to our source, "The story line of Karol Bagh has been Simi centric till now. But with the entry of Vicky aka Manit Joura, the focus will also be on the love life of Neetu, sister of Simi (Smriti Kalra)".

Elaborating on Vicky's character, our source states, "Vicky is a very confident macho man with a great physique. Neetu and Vicky bump into each other in an event, and it is kind of love at first sight for Neetu. Neetu will basically learn a lot of lessons as this relationship blossoms. Not much has been decided on the future story line though".

We called Manit Joura, who said, "Yes, I have been in talks with them. But I have not started shoot yet, so cannot tell anything as of now".

We tried calling the Producer Sudhir Sharma for a confirmation, but he remained unavailable.

Manit will be starting shoot in a day or two, and his entry is expected this Friday or early next week.

5 years ago It is outstanding horror movie and Sudeep perfectly play his role.

+ 5
13 years ago Looking forward to his entry, I'm glad Neetu doesn't go for Abhi. Nice to see a new face on tv.

+ 3
13 years ago OHH, for a change we see new love story in the show. Got bored with undecided prolonged saga of simi and bhalla.

+ 2
13 years ago he'll be a good pair for the cute dreamy neetu! but i'm still an abhi-simi supporter all the way! :D

+ 3
14 years ago uhhhh its not that scary i expected it to be!!!
i agree with this review...its not even scary throughout d movie!!!anybody can watch it alone lol!!!
overall i didnt like d movie

14 years ago I saw the movie last night, more than anything it is a movie about black magic and how some idiots in this world can through maybe meditation or mind over matter can try to destroy your life.....I like the question it raises, like is it just superstition or does black magic kala jadoo really exist....if its been around and talked about and feared for millions of years in all cultures, is it real or myth??!! I like the movie (special effects were a little lame though, but good by bollywood standards)

+ 3
14 years ago OMG HAHAH ITS GANGA! From Kasamh Se!
I wanna watch this scary movie, i some a few adds on the news yesterday!