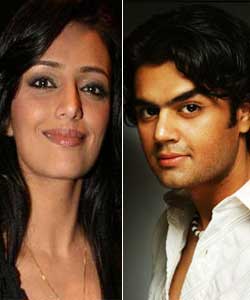 Neela Telefilms, makers of the popular SAB TV show Taarak Mehta Ka Ooltah Chashmah is making a new comedy show for Star Plus. The show will occupy a weekend slot on the channel, and is expected to launch in January end or early February.

The show will be a unique love story between a beautiful girl and a geek guy. Manish Paul will be playing the lead in the show, while Roshni Chopra will play the beauty who falls in love with this geek.

Our source states, "The show to be produced by Neela Telefilms has been titled Pyaar Main Twist. Manish Paul and Roshni Chopra will play the leads".

When contacted, Roshni Chopra refused to comment while Manish Paul said that he is in talks with the production house, but has not signed on anything yet.

We hear that the show will be introduced to the audience during the Red Carpet of Star Screen Awards which will be hosted by Manish Paul.

We tried contacting Producer Asit Modi, Neela Telefilms but he asked us to call later as he is out of Mumbai. Neela Telefilms is presently producing two successful shows in Taarak Mehta Ka Ooltah Chashmah and Krishnaben Khakrawala on Sony TV.

Let's now wait for the official confirmation from the channel…

pp1111 10 years ago best of luck roshni and manish i'm sure the show is gonna rock!

+ 2
10 years ago excitinggggg.....Manish is awesome and amazing actor..can;t wait for the show

10 years ago i dnt like manish's acting or hosting..shud change his look yaar

+ 2
10 years ago sounds like pyaar impossible...weird jodi but gud luck to them

11 years ago I just hope he will be a lot more classier then Sanjaaya was, the Indian name is on the line here. But wishing him all the best.