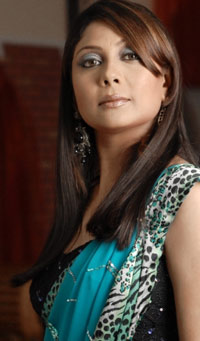 Maninee De Mishra was seen as a cop Agrima Singh in Star Plus show, Diya Aur Baati Hum. Well the actress is coming back in the same role but in Sony TV's  new series of Encounter.
"Yes I'll be playing a cop in Sony TV's Encounter but I'm not allowed to divulge any information about the story. All I can tell you is that it's gonna be a good story and you'll see me in different avatar," says Maninee.
She further adds, "IPS officer Agrima Singh was seen very differently as the story demanded that. So in Encounter also I'll try my best to give this new cop, a very different avatar. The shoot for the same is starting by tomorrow. Thus will have to check with the production house whether I can reveal the story or not."
Well we have also heard that the versatile actress Maninee might return to the show Diya Aur Baati? When asked Maninee she says, "Well you are the third person to ask me this. Till now I haven't got any calls from the production house to return back though but if I get an offer, I wouldn't mind. Actually my friends and few fans had been asking me to return in the show. During that training period, the show achieved very high number of TRPs."
Maninee says that she gets requests from the people to act in her husband's show too,  "They even tell me to do a cameo in my hubby's Mihir Mishra show (Ek Hasina Thi) as to boost the TRPs. I reply them telling that the show is already doing good with the entry of my husband. I always pray for him the most and I'm sure his show will hold the strong position in the coming days too."
Are there any chances to see both Mihir and Maninee acting together in a show? "Well right now there isn't anything but I would love to work with him again. As an actor we share a great bonding too and I'm very comfortable working with him. So pray for us."

We wish Maninee all the best!
16 Likes

b2011 6 years ago Thank you so much for the article...Diya Aur Baati Hum rocks!!{br]All the best Manini

All the best Maninee De.