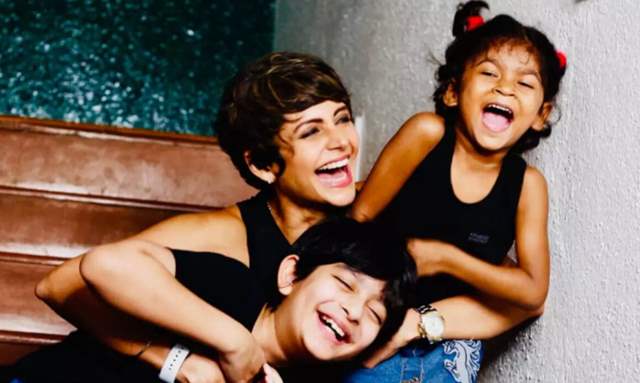 Actor Mandira Bedi and her husband announced the adoption of a four-year-old baby girl and named her Tara Bedi Kaushal on Sunday. The couple has been elated ever since her arrival and they took to their social media handles and uploaded a picture for the special announcement. In her post, Mandira calls Tara like a blessing from above. She became a part of their family on July 28, 2020.

During a recent interview with ETimes, Mandir was asked why she kept mum about the adoption for almost three months. The 48-year-old actress said, “Until the legal formalities are completed, one is not supposed to make it public. When a child comes home, he/she is considered to be in foster care for the first month; the legal procedures begin after that. However, since the courts were shut, we had to wait.”

Mandira spoke about Tara and revealed how she and Raj finalized for the big step. The Saaho actress revealed that they had applied for adoption three years ago, but it was during the lockdown that she felt the void even more.

The 48-year-old actress mentioned revisiting the adoption application (filed before the Central Adoption Resource Authority) and realized that their wait has been long as they had mentioned a preference for three states from where they would have liked to adopt. She revealed that they were looking for an older child since the couple didn’t want too much of an age gap between her and Vir (the couple’s nine-year-old son).

Mandira further mentioned that since nobody matched the criteria and were advised to extend their search across India. Within a week, we found Tara in a place near Jabalpur.

Speaking about the same the actress added, “Raj went to Jabalpur first, while Vir and I took a private jet the next day. By the time we reached, he had completed all the legal formalities. We fetched them at the airport and flew back.”

Mandira also spoke about grooming Tara and has been busy tutoring her daughter.

“When she came to us, she didn’t know the concept of colors. Now, she knows colors and English alphabets, can count up to 50, and write from 1 to 20. I don’t think it makes sense to enroll her in a school now, as the classes are online. We are teaching her the basics at home, and she will start going to school whenever it reopens,” said the actress.

The Vodka Diaries actress mentioned that she and Raj had first dreamt of Tara years ago. She concluded by informing ETimes that “Many years back, we had decided that we would have one biological child and adopt the other. We have always wanted to bring a daughter into our lives, and Tara is a fulfillment of that dream.”

Previously, the actress spoke about her adoption plans and revealed that she and her husband Raj wanted a sister for their son. She also mentioned that they wish to adopt a girl who could be between two-and-a-half to four-years-old.