It looks as though we are now in a phase where there is no room for 'secrecy' when in love!! After the scintillating news of Angad and Parul's respective love lives, news is abuzz that Manav Vij who is presently seen in Kis Desh and Mitwa has found the love of his life!! 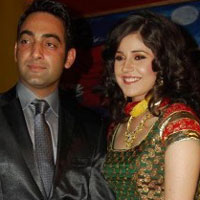 Featured Video
According to our source, "Manav Vij and Vaishali Sahdev who essays the role of Meher in Kis Desh are in love. They were in fact spotted together at the recently held Star Parivaar Awards".

If sources are to be believed, Manav organized a party on the occasion of Vaishali's birthday recently, where the entire Kis Desh team was invited.

"The sudden death of Vaishali's mother in February this year forced the couple to not bring their relationship into the limelight. However, they plan to get married very soon, and their Kundalis have also matched", explains our source close to the couple.

We called up Manav Vij who confirmed the news to Telly Buzz and said, "Yes, Meher is the love of my life. She is the special person in my life".

In fact, Manav calls his lady love by her on screen name Meher. "Meher in Punjabi means 'Blessings', and she is the ultimate blessing that God has given me. I now call her by this name only", he quips.

When asked about wedding plans, he replied, "You will know when it is the right time".

Well, finally we have someone who has no hesitation in accepting that he is bitten by the love bug.. Three cheers to Manav..

yamini lovs ksg 13 years ago i like meher, but i don't really like the jodi.. meher looks very young with him n manav also isn't very good-looking
but I love n respect people who r in love n adore a couple who does'nt hesitate in accepting their love, so I wish them best of luck for their future n maya they both have a blissfull married life.

13 years ago AWWWWWW THEYRE GONNA GET MARRIED!?! IM SO GLAD THEY CAME OUT! GOOD LUK FOR BOTH OF THEM!

Pinkie21 13 years ago Awww thats sweetm shes really pretty, may they be happy together.

+ 4
13 years ago thats sweet. it feels great when ppl can live and love the person they love for the whole life!!

13 years ago awww bth of thm are soo cute and thy are bth good actrs! gd luck to thm! luv bth of thm, best wshes!

+ 5
13 years ago awwwwwwwww so cute, so happy for them. All the best for the future, come on NB lol

+ 2
13 years ago We love you as Sanju in Salaam Zindagi and now as Meher!

sarmin128 13 years ago oh wow meher is in love with her so called jiju? lolz....cho cute. i thought i would hear sumthing abt preet and meher... itz all rite.